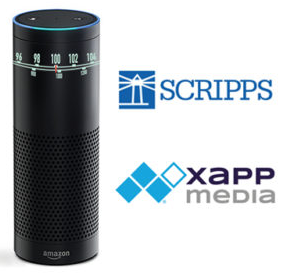 XAPPmediab Thursday announced it was selected by The E.W. Scripps Company to bring the company’s 34 radio stations in 13 states to Amazon Alexa-supported devices.

“Amazon Alexa has quickly become a very important platform for the radio industry,” said Rob McCracken, a director in the digital solutions group for Scripps. “Gartner forecasts that 75 percent of US households will have at least one Alexa-like device by 2020, and numerous studies show that audio entertainment is one of the top two use cases for the devices. Radio must be available on Alexa today while consumers are forming their listening habits. It is an opportunity for Scripps stations to increase time spent listening both at home and eventually in the car.”

“We are honored to work with Scripps to bring Amazon Alexa users access to its radio stations’ original audio content,” said Ryan Higbie, vice president of sales, XAPPmedia. “The technology offers an immersive experience for users to listen to their favorite radio programs on demand. XAPP is committed to helping Scripps make the most of this new distribution channel and build deeper listener relationships at the same time.”

“It was critical to have a skilled partner like XAPP help us launch our radio stations on Alexa,” said McCracken. “We looked at all of the leading technology companies in the market, but XAPPmedia’s technology, years of experience and credentials with Amazon, Google and Microsoft were important factors in the decision.”

“This is a big step forward for us,” said Steve Wexler, vice president of radio for Scripps. “It’s important that we go where our audience goes, and this new partnership makes the Scripps radio stations easily accessible to our listeners across multiple platforms.”

Consumers have purchased over 11 million Amazon Echo devices enabled with the Alexa voice assistant, and that number is expected to hit nearly 20 million in 2017. Because these are household devices, that device total will represent audience reach of about 50 million Americans in 2017 and over 200 million in three years. In addition, Ford and other auto manufacturers expect to produce about 20 million vehicles with Alexa support in 2017.

You can learn more about radio and Amazon Alexa here: https://xappmedia.com/voice-radio/.
Posted 5:37:00 AM