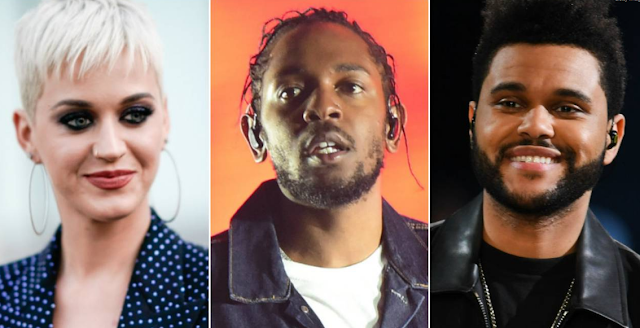 Rapper Kendrick Lamar earned a leading eight MTV Video Music Award (VMA) nominations on Tuesday for his searing critique on the excesses of fame and social media in his "Humble" music video, while Katy Perry and The Weeknd scored five nods each, according to Reuters.

Lamar's "Humble" video, in which the rapper is seen lying on piles of cash, recreating Leonardo da Vinci's famous painting "The Last Supper" and with his hair on fire, will contend for video of the year, the top prize at the fan-voted, youth-orientated awards show.

Perry's big budget video for "Chained to the Rhythm," which saw her in a retro-futuristic theme park called Oblivia, landed four nods including best pop and visual effects and she also landed a nomination for best collaboration as a featured artist on Calvin Harris' summer track "Feels."

However, the pop singer was snubbed in the video and artist of the year categories, while The Weeknd made the shortlist for both.

The MTV Video Music Awards, which will air live from Inglewood, California on Aug. 27, has a reputation for irreverence, shock tactics and unpredictable moments.
Posted 3:05:00 AM