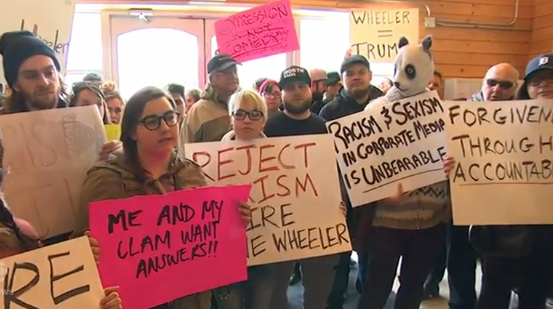 Dozens protested outside Winnipeg radio station 92 CITI FM on Tuesday afternoon to demand that morning show host Dave Wheeler be fired over music videos that some say are sexist and racist.

According to the CBC, About 40 to 60 people gathered outside the station building on Osborne Street, holding signs saying "Fire Dave Wheeler" and "Reject Sexism."

The group initially rallied outside the building, then entered the building and protested at CITI FM's front doors. Station managers did not respond to the protesters.

"I'm frustrated. We need to move together based on understanding and respect and love for each other, and this is not the way to do it."

The station posted animated versions of the songs Transcona Girls and North End Boy on their social media accounts. The songs were created two years ago, but reposted as animated videos on Monday.

The songs include lines about women and girls from Transcona being "passed around this great big town and they just don't seem to care." Another lyric suggests women who live in Wolseley are lesbians.

Girls and women living in the North End "really like to stab you and steal your bike," one of the songs says.

Wheeler later issued an apology on Facebook and Twitter, saying the videos were "insensitive and went too far" in trying to entertain their audience. Wheeler posted the following on CITI's website:


"Every day, we try to entertain our audiences, but sometimes it can go too far, and that’s what happened yesterday. There comes a point when something intended as a joke just isn’t funny. Our community has gone through a lot and been called a lot of things. And the best thing we can do right now as a community is come together and build each other up. We have heard the concerns of our community clearly and apologize for the videos that were offensive and in poor taste."

Craig Pfeifer, the program director at 92 CITI FM, issued a statement saying Wheeler is suspended "until we have completed a thorough review of the situation."

Pfeifer added that the videos "should never have been broadcast, and we have already launched an investigation as to how this content made it onto our airwaves."
Posted 3:22:00 AM