Toll Brothers on Saturday unveiled its latest plans for a 328-home neighborhood on 75 acres of Bethesda land that has long been home to four WMAL AM radio towers.

Cumulus is hoping to bank $75 to $90 million from the land if the homes are approved and the sale goes through.

According to Bethesda magazine, the meeting, required by the Planning Department before the developer submits its preliminary plan application for the project, drew more than 150 residents to the cafeteria at North Bethesda Middle School—many with the same concerns about added traffic and students from the new homes that have been discussed in previous public meetings. 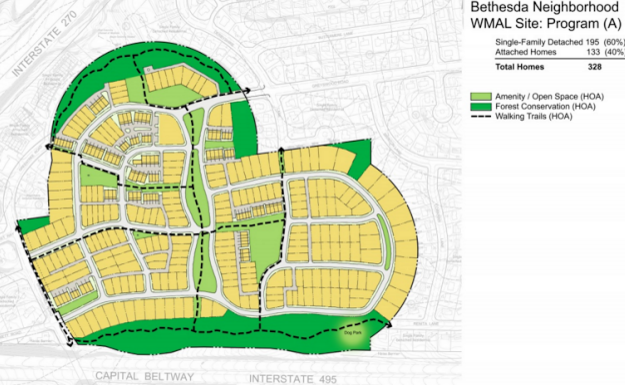 Some residents at the meeting scoffed at that projection, saying it was too low for a neighborhood of more than 300 homes with two-car garages.

“I just want everybody to understand that not everyone leaves at the same time,” said Nancy Randall, principal at Toll Brothers’ transportation consultant Wells + Associates. “I understand why it is hard to conceive of the numbers.”

Randall said recent changes in the mix of single-family detached and townhome units planned for the neighborhood meant a detailed traffic study wasn’t ready to be presented Saturday to the public.

John Harris, Toll Brothers vice president, told the crowd the Pennsylvania-based developer would hold another public meeting to discuss the traffic study, though he said he couldn’t guarantee that meeting would happen before the traffic study is submitted as part of the preliminary plan in May.

Meanwhile, Cumulus has applied for a CP to move the tramsitter site also used by WSPZ 570 AM, owned by Red Zebra Broadcasting.