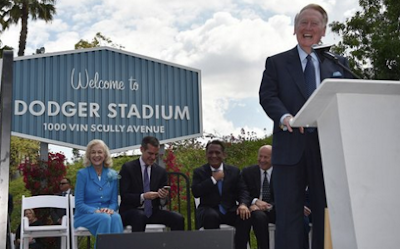 Vin Scully may be stepping out of the Dodgers' broadcast booth this year, but his legacy will live on forever.

The Dodgers and the City of Los Angeles on Monday dedicated Vin Scully Ave. in honor of the Hall of Fame broadcaster, who is in his 67th and final season as the voice of Dodgers baseball.

The address to Dodger Stadium is now 1000 Vin Scully Ave.,according to mlb.com.

Ever humble, Scully initially resisted the honor when the idea was first mentioned to him. He eventually relented, and during Monday's ceremony in front of hundreds of Dodgers fans, Scully had nothing but thanks and kind words for a fan base that has adored his work for as long as most can remember.

"In all honestly, if you asked me this very minute, 'How do you feel about what's going on?' I would honestly say to you, 'Overwhelmed,'" Scully said. "I really am."

"This is a very big day, not only in Dodger history, but in our city's history," Steiner said. "In a city of stars, we can make a pretty compelling case that Vin is the biggest and most popular star of all. No last name required.
Posted 3:09:00 AM