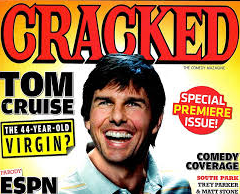 E.W. Scripps has acquired Cracked for $39 million, marking the latest example of a traditional media company buying a satirical digital group to appeal to younger viewers.

The acquisition marks the latest effort by Cincinnati-based Scripps, which has 33 local television and 34 radio stations across the country, to ramp up its digital offering to appeal to millennials. In 2013, Scripps bought Newsy, a digital video news service. Last year, Scripps bought Midroll Media, a provider of podcasts.

Through the acquisition of Cracked, and its site Cracked.com, Scripps hopes to bolster its appeal to the millennial (18- to 35-year-old) audience, he said.

Scripps is the latest traditional media company to buy a satirical site to reach younger viewers. In January, Univision Communications Inc bought a stake in The Onion.

While many media companies are turning to short-form video to appeal to younger viewers, adding humor to the mix is a way to stand out and get buzz on social media, said Paul Verna, an analyst at eMarketer.

Seventeen percent of viewers over the age of 14 get their news from social media, up from 4 percent in 2012, according to Deloitte. Meanwhile, only 7 percent get news from digital newspapers, down from 9 percent in 2012.
Posted 3:15:00 AM