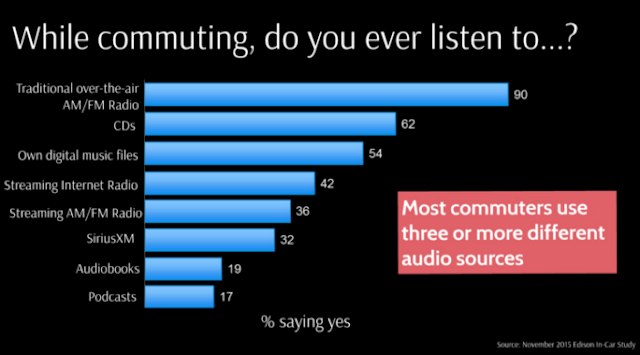 New data from Edison Research’s “Hacking The Commuter Code” study show nine in ten commuters say they use AM/FM radio in the car, far exceeding the No. 2 choice, CD players, used by 62%.

The study included 1,117 participants who commute to work for more than 20 minutes, and do so alone. Conducted in the late fall of 2015, the sample had an average commute length of 35 minutes.

After radio and CD players, over half (54%) of those surveyed listen to their own digital music files, 42% listen to streaming internet radio services such as Pandora, and 36% listen to streamed AM/FM radio. Just over one in three listen to SiriusXM Radio (32%), 19% of respondents listen to audiobooks and 17% listen to podcasts. 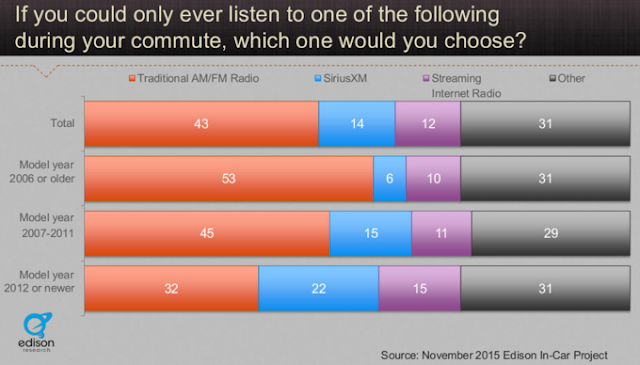 Although broadcast radio retained its dominance in this latest survey, “the new wave in audio usage in the car is employing one’s smartphone to listen,”  Radio remains the top audio choice for commuters by a significant margin, according to a new Edison Research study. But in-car audio is a dynamic space and “things are changing,” the report notes. That change is evident when preferences are broken down based on the age of the car.

Broadcast radio also came out on top when commuters were asked what they listen to most in the car. 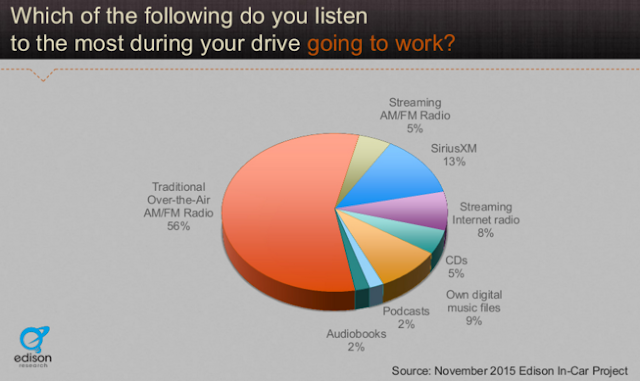 More than half of the sample said AM/FM is what they use most, both going to and coming home from work. In morning drive, traditional over-the-air AM/FM radio is used most by 56% of respondents.

And when Edison asked which one would you choose if you could only have one, radio remained way out ahead of the other options. The results: AM/FM (43%), owned digital music files (17%), SiriusXM (14%), streaming internet radio (12%), CDs (5%) and podcasts and audio books (2% each).

In-Car Audio is a dynamic space
The newer the car, the more options commuters have for listening to audio.  While those with older cars largely only have AM/FM Radio and perhaps a CD player – newer models have Satellite Radio and easy access to streamed audio and digital files.  And when people have more options – it is clear that they use more options.  While the automotive market turns over slowly – with each click of the dial it becomes a bit more complex and competitive.

Easy access to changes leads to lots of switching
By comparison to typical at-home or at-work listening environments, in the car consumers have the buttons right at their fingertips at most times.  This leads to many people switching regularly.  Fewer than one-in-three of our respondents mostly set their audio and enjoy it through their typical commutes.  A large majority switch around regularly; and one-in-five switch around almost compulsively.

Content providers need to think about a fast-twitch switching environment
If you are targeting the in-car environment, you have to think about how to keep people on your product.  If it’s music, it has to be the right song every time.  If it’s talk, it has to be compelling.  And in particular you have to think about how commercials fit in.  A certain percentage will tune away the moment a commercial comes on.  However, content providers who depend on advertising have to consider how to best get those commercials heard.  The content that wraps the commercials needs to make people want to stay, and of course the commercials need to be relevant and breaks simply can’t be too long in the in-car environment.

Advertisers and Marketers need to consider these findings
Like those Geico ads that are ‘over in five seconds’ before adding another ten of humorous nothingness, audio advertisers need to consider the trigger-fingers of listeners in an in-car environment.  Consider how to grab people’s attention in the first five seconds of a spot if you hope to limit tune-out within that spot.  And there should probably be more of a premium for first-in-the-pod position in a break, or more of a discount for spots as a break continues.  These elements might particularly be relevant for online alternatives, for instance Pandora which seldom plays two spots in a row but interrupts more times per hour than AM/FM does.  The knowledge that only one or two commercials is coming may reduce the quick-twitch tune-outs.
Posted 6:12:00 AM