Sumner Redstone Won't Need To Testify After All

LOS ANGELES (Reuters) - A California judge declined to order a deposition of Sumner Redstone after lawyers for the 92-year-old media mogul said on Thursday they do not plan to call him to testify at a trial over his mental competence.

Attorneys for Redstone's former girlfriend, Manuela Herzer, had argued in court filings that they should be allowed to take the deposition because he had planned to testify at a trial scheduled to start on May 6.

At a hearing in Los Angeles Superior Court on Thursday, lawyers for Redstone said they do not plan to call Redstone as a witness. Redstone has a “severe” speech impediment that becomes more pronounced in stressful situations, attorney Robert Klieger said. “We can’t responsibly put him through that.”

Judge David Cowan said he saw no need to order a deposition if Redstone would not testify at the trial.    Herzer has filed a lawsuit arguing that the multi-billionaire was not mentally competent last October when he removed her as the person designated to make his health care decisions if he is not able.

A trial could cause further embarrassment for the ailing Redstone and his family, and act as a continued distraction for media company Viacom Inc, which is majority-owned by Redstone. He is also the controlling shareholder of CBS Corp.

The deposition of Viacom CEO Philippe Dauman in the case is scheduled for April 29, according to a lawyer for Herzer. Redstone’s daughter, Shari Redstone, will be deposed on April 19. 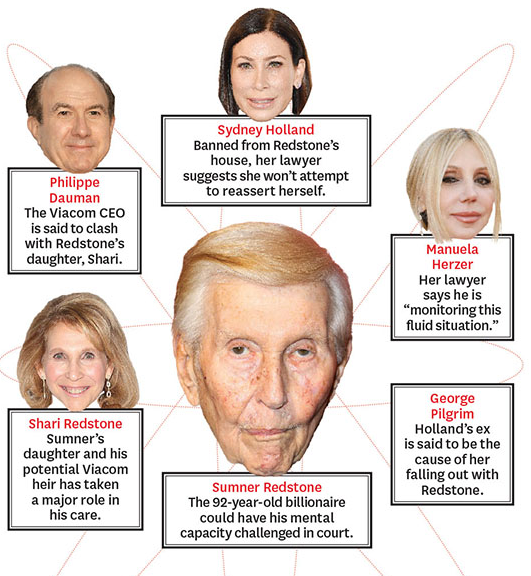 Settlement talks between lawyers representing Redstone and Herzer have broken down, according to Herzer’s court filing on Wednesday.     “We’d like to resolve this,” Pierce O’Donnell, an attorney for Herzer, told reporters after the court hearing on Thursday. “We hit some snags. Maybe after today things will be different.”

O'Donnell said the defense hurt its case by declining to produce Redstone as a witness.

"Without Redstone testifying, they cannot demonstrate his mental competency in the face of distinguished expert psychiatric reports and a mountain of evidence that Redstone is tragically incapacitated," O'Donnell said in a statement.

Gabrielle Vidal, an attorney for Redstone, said his team was “deeply gratified that the court continues to protect Mr. Redstone’s privacy and dignity.”

"Ms. Herzer’s eagerness to subject a 92-year old man with a severe speech impairment to these intrusive proceedings is offensive," Vidal added.
Posted 3:37:00 AM