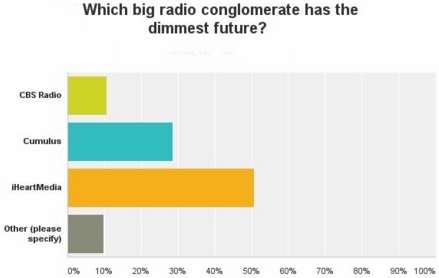 In a recent poll about big radio, Media Life readers were asked what they saw as the future of CBS Radio now that it was on the block.

Key to it all, of course, is just how valuable CBS Radio really is, both whole and broken up.

The largest share of respondents, 41 percent, agreed with this statement: “It will not find a buyer and will be sold off in pieces.”

Twenty-eight percent agreed with this statement: “The fact that CBS chief Les Moonves wants to dump the unit tells you its future is none too bright.”

Few think it will be bought up by a major player in the radio industry, which is understandable with the two top players, iHeartMedia and Cumulus, struggling under hefty debt loads. Just 5 percent of respondents thought so.

A number of respondents commented that a spinoff made the most sense, with the taxes advantages that come with an initial public offering. They note CBS spun off its outdoor division in 2014. Radio would go the same way.

“It will be spun off as a separate radio entity similar to what CBS did with its outdoor business,” wrote one respondent.

“Will take this out as an IPO and dividend it out to existing CBS holders–similar to CBS Outdoor,” wrote another.

Some readers think that would be good for radio. As one put it, “The spinoff of CBS to their own company will be the best thing that happened to the industry in years.”
Posted 3:44:00 AM