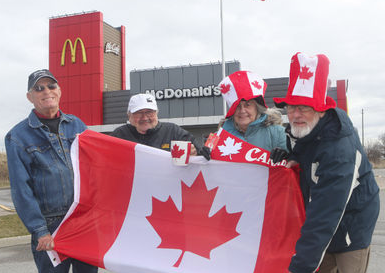 Patrons of a McDonald’s restaurant in Port Hope, Canada, a suburb of Toronto, said they are irked that the restaurant plays the Star-Spangled Banner every morning. The restaurant is not to blame, per say, as it is playing the radio station 93.7 The Mountain – which is based in Spokane.

The paper did some digging and found out that the restaurant uses a satellite to play music and they only get two stations – the other being rap. It has been this way for two years.

Patrons said they are not buying that excuse. Durrant said they would rather the restaurant played a local station.

Following a front-page story by columnist Mike Strobel in Wednesday’s Toronto Sun, a local broadcaster announced it gave the restaurant a tuner that will pick up a local station.