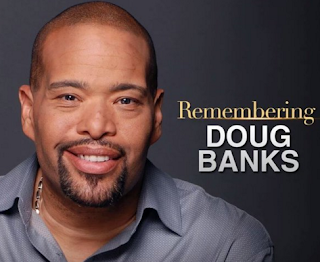 Legendary radio personality Doug Banks passed away on Monday due to complications from diabetes. His death shocked fans of the Doug Banks Radio Show, many whom had just seen him Friday at the Black Womens Expo in Chicago, where he usually broadcast his show live.

He was 58, according to Ebony.

Banks loved radio and he never backed down on a commitment. Rather than complain openly about diabetes, the affable radio personality chose to focus on the funny, which is why he made the Chicago trip despite feeling under the weather.

Banks started his career at the age of 16 in his native Detroit. From there, he came to Chicago radio, where he worked in the early days of now-defunct station WBMX. After Detroit, he went to Los Angeles to work for several stations before moving to  stations in Las Vegas and San Francisco before moving to Chicago, where he worked at WBMX. He most recently could be heard on i-Heart radio station WVAZ V103-102.7 FM in Chicago. His syndicated program was very popular.

When you talk to Banks’ friends and those whom he influenced, you hear one word repeated over and over again: nice.  His work laid the template for what black radio could be. An entire generation of Chicagoans, and as he syndicated, Americans, in particular grew up on Banks.

WGCI-FM hip hop personality DJ Moondawg was one of them. “That’s such a great loss for radio,” says Moondawg. “We had maybe like five encounters but he always gave me props and said he loved me on air and that I had a bright future. Coming from him, [that was] just a totally humbling and yet reassuring feeling. He was always kind, humble, and true to what you heard daily on the radio. Doug was authentic…a rarity in these times.”

House music deejay and in-house deejay for the Tom Joyner Morning Show, Steve “Silk” Hurley, listened to Banks’ show frequently. He was a fan, and has history with Banks going back to the WBMX days.

Banks grew to be a huge radio personality, commanding ad dollars and important time slots. With all that success he never turned into a diva, says Hurley. “He was a good example for us in that he was humble. He was so good on the radio, but he was such a down to earth person. It encouraged us deejays. Even when we had success with different things, to still remain humble. I was raised that way, but Doug reinforced it.

“He was successful because he came from local radio,” says Hurley, who adds that Banks and Joyner are ‘cut from the same cloth.’ “Even when he’s on his syndicated show and he’s talking to the listeners, it still sounds local. Not a lot of people know how to do that with the national audience.”
Posted 3:01:00 AM