SiriusXM, Not Pandora, Benefits In The Connected Car 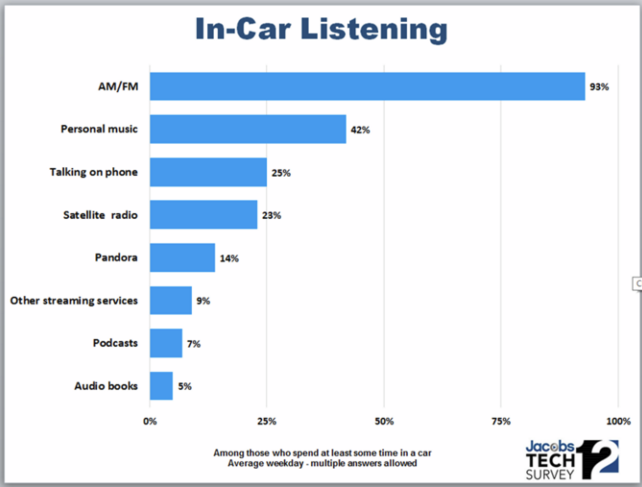 The dawn of the connected car era has been portrayed in some circles as a doomsday scenario for broadcast radio. There are even the requisite ominous predictions that consumers will shun their favorite AM/FM stations for new digital alternatives that are just a button press or voice command away. But, according to InsideRadio, research tells a decidedly different tale.

In its TechSurvey 12, Jacobs Media asked more than 39,000 respondents to assign a percentage to each of nine in-car audio sources that approximates their average time spent with each medium, source and activity. In addition to the total survey results, Jacobs also isolated just connected car owners. AM/FM ranked first in both groups.

Among the total sample, respondents reported spending an average 66% of their time in a car with broadcast radio. Among connected car owners the percentage dropped to 55%.

Pandora has sparked a spirited discussion about how its audio content will become “the natural choice” in the car as more new, connected cars hit the road and as more drivers experience personalized streaming. So far, however, that’s not the reality. According to the Jacobs survey, the pureplay accounts for just 3% of in-car audio time among all respondents and 3% within the isolated sample of connected car owners.

“True enough, AM/FM radio takes a hit, dropping to a 55% share of in-car media usage,” Jacobs says in a new blog post that previews some of TechSurvey 12’s findings. “But it’s not Pandora that benefits—it’s satellite radio, doubling in share among those who drive cars that are fully connected.”

Indeed, SiriusXM Radio grows from an average 10% share of in-car audio time in the total sample to 20% with connected car owners. 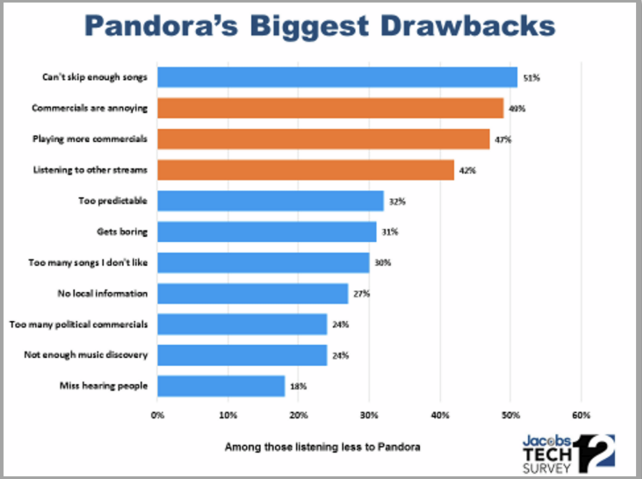 For the one-in-four Pandora listeners who say they’re spending less time with the service, the biggest drawbacks have to do with programming, commercials and competition.

“It’s noteworthy that while Pandora boasts of a more conducive commercial environment, particularly compared to broadcast radio, it’s a fact that advertising is not especially welcome content from pureplays,” Jacobs Media president Fred Jacobs says in a blog post previewing some of the annual survey’s findings. “In the case of Pandora [and other media outlets], they may find it just as rocky and arduous when it comes to successfully integrating advertising with the content.”

Pandora faces formidable competition from deep-pocketed players, such as Apple Music and an ascendant Spotify, which has contributed to a decline in its listening metrics. The Jacobs survey finds four of ten of those listening less to Pandora cite using other streaming sources as one of the top reasons why.
Posted 7:28:00 AM