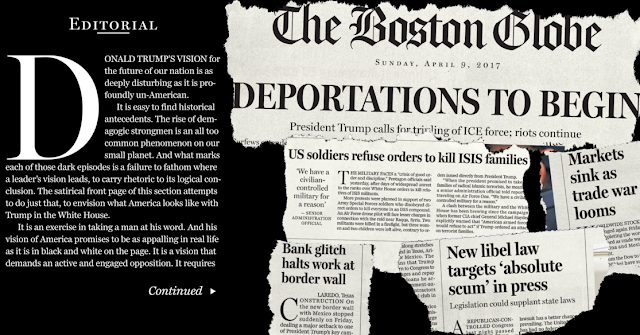 The mock-up, offering the Globe's satirical view of America under a Trump presidency, was set to run as the front page of the newspaper's "Ideas" section, followed on page 2 of that section by the anti-Trump editorial.

The novel front-page spoof, says the editorial, is designed to take Trump's rhetoric and his policy positions to their "logical conclusion."

"It is an exercise in taking a man at his word," the editorial says. "And his vision of America promises to be as appalling in real life as it is in black and white on the page."

The editorial brands the billionaire businessman as a "demagogue" whose own political vision is "profoundly un-American." 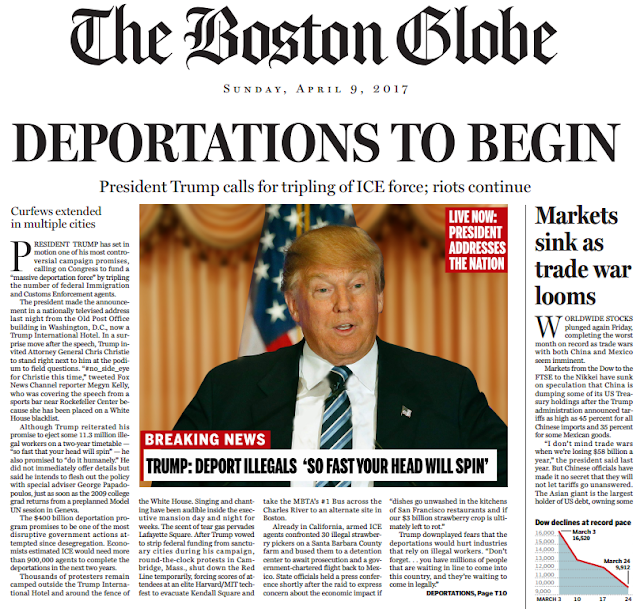 Noting that she reports to John Henry, the Globe's publisher, Clegg stressed to Reuters in a telephone interview that the front-page parody "does not involve our newsroom."

Clegg said she knew of no other such expression of political satire ever published by the Globe or any other major metropolitan daily in the United States during her 30 years at the newspaper. But it was reminiscent of the kind of parody regularly featured by the farcical online news outlet, The Onion.

The mock front page envisions a host of political, financial and international scenarios ranging from disturbingly surreal to darkly humorous, all playing on Trump's real pronouncements about illegal immigration, Muslims, national security and the First Amendment.

A color photograph of Trump making a speech is centered near the top of the page under a banner headline reading: "Deportations to begin," with a subhead reporting that Trump was calling for a tripling of immigration enforcement personnel as "riots continue."

A top story on the page opens with the paragraph: "Worldwide stocks plunged again Friday, completing the worst month on record as trade wars with both China and Mexico seem imminent."

Other mock entries include a story about unrest in the ranks of the U.S. military as soldiers refuse orders to kill family members of Islamic State militants, and the headline: "New libel law targets 'absolute scum' in press."

In a more tongue-in-cheek vein, a brief item reports Trump on the "short list" for the Nobel Peace Prize. "His feat? Healing a 1,385-year-old schism between Sunni and Shi'ite Muslims, which has fueled bloody conflicts across the globe for centuries."

Trump ridiculed the "stupid," "worthless" paper during a rally in Rochester, NY Sunday afternoon. The Globe "made up the whole front page," which "is really no different from the whole paper," he said, earning laughs from the crowd.
Posted 3:35:00 AM