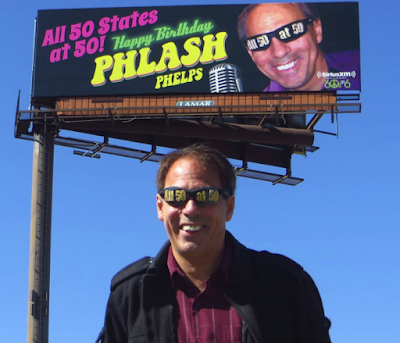 A SiriusXM Radio DJ has endeared himself to a listenership in Northeastern Pennsylvania and found his face on area billboards for his efforts, according to the Wilkes-Barre Times-Leader.

Phlash Phelps, who hosts “‘60s on 6,” which he broadcasts nationally from Washington D.C., has been featured on several Lamar Advertising spaces since 2013. Erected on April 7, the most recent, which celebrates Phelps’ 50th birthday as well as his mission to visit all 50 states in the next year, is bringing the radio personality to Scranton at noon Sunday.

Doreen Yakoski worked for Lamar for 19 years and was the charting manager when she pitched the idea to feature Phelps on a space.

After hearing Phelps take a caller from Scranton to discuss the Steamtown National Historical Site and the Scranton/Wilkes-Barre RailRiders, Yakoski realized he’d spent time in the area. She went to general manager Tom Donohue with a proposition.

“I said, ‘Do you think if Phlash came to Scranton, we could do a billboard welcoming him to the city?’”

Donohue, also a fan of Phelps’ show, consented to the idea, and Phelps traveled to Scranton to see the advertisement. Grateful for the warm welcome, he befriended the folks at Lamar and several other billboards followed.

Donohue decided to issue a special advertisement letting Northeastern Pennsylvanians know about Phelps’ current road trip. The billboard stands off the River Street exit of I-81.

“The fact that Lamar right there in Scranton wanted to do that for me is incredible,” Phelps said.

A Baltimore native who worked at 16 different radio stations before landing his gig at Sirius, where he's been for the past 16-years.  Phelps is based in Washington DC for SiriusXM and says was bitten by the travel bug in his 20s.

“He’s going to get a photo (at the billboard) and Pennsylvania will be one of his 50 states during the tour,” Yakoski said. Pennsylvania is scheduled as Phelps’ second state.