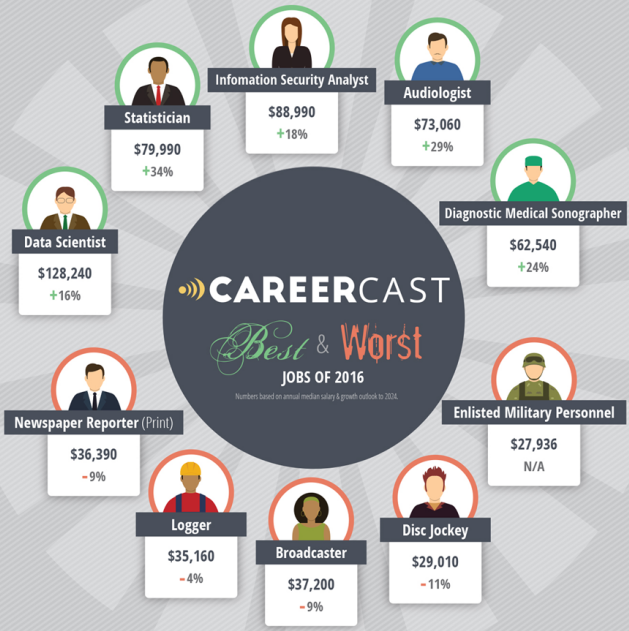 There has always been controversy about who has the worst job. Is it the person who drives a garbage truck or the waiter in a busy restaurant? While neither or those professions made CareerCast.com’s 28th annual Jobs Rated report’s 10 worst jobs list, Newspaper Reporter, Broadcaster and Pest Control Worker are ranked among the worst jobs of 2016.

Declining employment opportunities contribute to the inclusion of many of the 10 worst careers in the 2016 Jobs Rated report. Traditional news media is particularly hard hit.

Newspaper Reporter checks in at No. 200 for a third straight year, but Broadcaster isn’t far behind at No. 198.

“The news business has changed drastically over the years, and not in a good way,” says former Broadcaster Ann Baldwin, president of Baldwin Media PR in New Britain, Connecticut. “When people ask me if I miss it, I tell them ‘I feel as if I jumped off of a sinking ship.’”

Baldwin’s time in the media, working at TV stations in Rocky Mountains as well as Hartford, Connecticut, helped prepare her for her new career -- providing public relations solutions and crisis management for businesses.

Being able to parlay the skills you gained from a profession losing jobs is important, and broadcasting is one of the hardest hit in the 2016 Jobs Rated report. Employment of broadcasters is expected to decline by 9%, or 4,800 total positions, by 2024. Broadcasters seeking a career transition might want to consider becoming a podcaster, online news producer or data journalist.

One factor directly contributing to the shrinking of media outlets, reflected in the Jobs Rated report’s worst jobs, is the decline of advertising revenue. And, a drop in advertising sales translates to a decline in positions for advertising sales people. Advertising Sales Person appears on the 10 worst jobs list for the first time (#193), after finishing just outside the bottom 10 a year ago.

Declining prospects tied to the stability – or instability – of media impact the outlook for the profession. Add high stress from the growing pressure to drive profits for increasingly less profitable outlets, and advertising sales person’s place in the worst jobs of 2016 makes sense.
Posted 5:11:00 AM