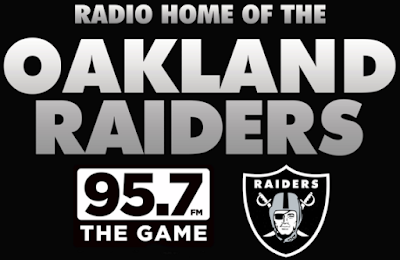 The Oakland Raiders and KGMZ 95.7 FM The GAME announced Wednesday an agreement for 95.7 The GAME to continue as the Silver and Black’s flagship radio station in the Bay Area.

95.7 The GAME, which first partnered with the Raiders in 2013, will broadcast all of the Raiders’ 16 regular season games, all postseason contests and preseason games, while enhancing game coverage with exciting Raiders-oriented daily programming.

“The Raiders are excited to continue working with 95.7 The GAME to bring team coverage to Raider Nation,” said Raiders President Marc Badain. “We also look forward to working with Compass Media Networks to transmit on-field action to a broad audience that includes the best fans in the NFL.”

In addition to being heard on 95.7 The GAME, Entercom San Francisco will simulcast Raiders football on affiliate stations KBLX 102.9 FM and KUFX 98.5 FM, extending Raiders’ game-day reach throughout the entire Bay Area. “There’s no more passionate fan than a Raiders fan; we’re delighted to expand our Raiders coverage for the 1.7 million plus fans here in the Bay area”, commented Steve DiNardo, Vice President/Market Manager Entercom/San Francisco.

“The Raiders will be front and center every Monday,” said 95.7 The GAME Program Director Don Kollins, “The return of Raiders Monday and the addition of several new Programming features will build on the best Raider coverage.”
In addition, the 2016 season will feature live remote broadcasts that bring fans inside the Raiders’ Alameda headquarters and capture the excitement as the team prepares for the season at training camp in Napa, Calif.
Posted 3:18:00 AM