O'Reilly To Trump: "Stop The Nonsense" 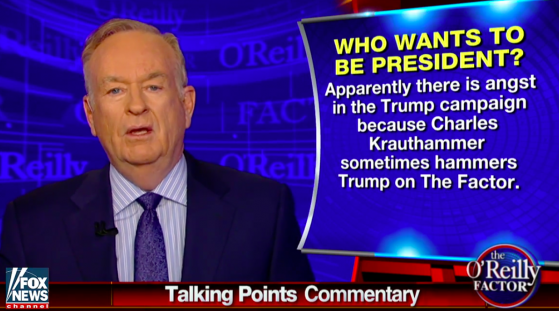 There’s been some “angst” within 2016 candidate Donald Trump’s campaign about the billionaire businessman appearing on Fox News’ “O’Reilly Factor” because of how frequently Charles Krauthammer, a critic of Trump, appears on the show, according to host Bill O’Reilly.

According to TheBlaze, The Fox News anchor said his team has been in negotiations with Trump’s operatives “for days,” but the candidate ultimately declined to appear on the program, noting the fact that Krauthammer is often on his show and he “sometimes hammers” the GOP delegate leader.

O’Reilly went on to defend his record when it comes to Trump, saying that he’s been “very fair” on his program, including when Krauthammer is on the “O’Reilly Factor.”

“Each time Charles addresses Trump, I put on someone like Newt Gingrich, who has been kind to Donald Trump, to balance the presentation,” he said.

“We have been very fair — very fair — to Donald Trump on this program,” O’Reilly continued, “but that does not mean we will not critique him or cancel guests who have a dim view of him.”

O’Reilly even noted the fact that he stood by Trump Tuesday night on the issue of race when radio host Tavis Smiley said the real estate mogul is a “racial arsonist.”

Ultimately, the “O’Reilly Factor” host called on Trump to “stop the nonsense.”
Posted 3:42:00 AM