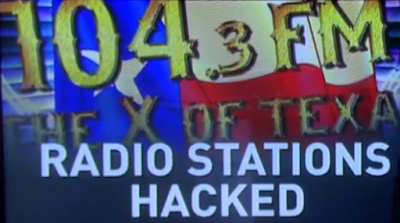 Listeners got an earful this week when a country music radio station in Livingston was hacked.

Instead of music, a sexually explicit podcast, called FurCast, was broadcast for four hours on KXAX-LP 104.3 FM. A radio station in Colorado was also targeted.

In Breckenridge, CO, someone was able to take over the IP address that sends the KIFT 106.3 FM’s signal to a booster site in Silverthorne, so what was heard over the air was nowhere near what the station thought it was broadcasting, and they had no way to control it as station engineers were locked out.


Furcast is an adult program produced by a group of friends in New York, according to KHOU-TV11.

“At that time in the morning, we have a lot of people going to school, taking their kids to school and a lot of businesses listening in,” said station owner Jason Mclelland. “We want to apologize to anyone who was listening out there. We’ll make sure this doesn’t happen again.”

According to a statement posted online, the producers of FurCast say they had nothing to do with the malicious hack.


“Our Sincerest Apologies. We have been made aware of a reported incident where FurCast & XBN content was syndicated without our knowledge on a terrestrial FCC licensed FM radio station. We are deeply sorry to hear about this inappropriate incident. FurCast and XBN content is made freely available on iTunes, our website and our YouTube channel for anyone to download and distribute. We are a group of friends who publish audio and video entertainment, wherein it is marked for containing explicit and inappropriate content. We are working with law enforcement to investigate this incident. We have preserved all access log files.”

The Federal Communications Commission (FCC) is investigating the hacks.
Posted 3:18:00 AM