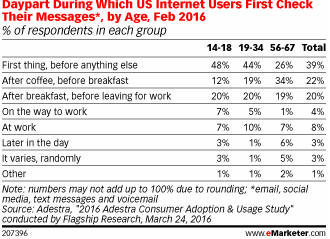 Communication comes first for most US internet users—and even before coffee for a great many of them, according to February 2016 polling.

Email service provider Adestra and Flagship Research surveyed US internet users under 35 and over 55 about their usage habits, and found that overall, 61% of them checked email, social media, text messages and voicemail before breakfast—including 39% who did so before their morning coffee. One in five respondents waited to check their messages until after the most important meal of the day, but before heading out to work. More than eight in 10 respondents checked their basic communication channels before work on a typical day. 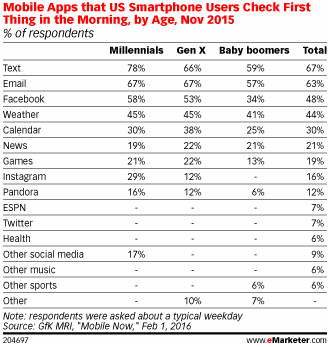 When GfK MRI asked US smartphone users about what mobile apps they checked first thing in the morning on a typical weekday, two-thirds said they looked at text messages, and 63% checked email. The survey didn’t specify, however, whether caffeine took precedence over messaging. Social media, namely Facebook, was certainly popular, with nearly half of smartphone users logging on first thing—but there was a big dropoff between the top two basic communication apps and Facebook, suggesting that email and texting are more universal morning routines—even among millennials.
Posted 3:40:00 AM