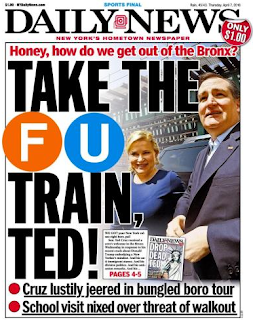 If you're the New York Daily News, it's not every day you get to tell Ted Cruz to "TAKE THE F U TRAIN" on your front page.

So, reports Politico,  News editor Jim Rich must have been particularly giddy when that headline rolled off his tongue following the candidate's arctic reception during an April 6 campaign stop at a self-described Chinese-Dominican eatery under the rumbling, elevated 6 train tracks in the Parkchester Section of the Bronx, to a crowd of just 50 supporters-and a handful of loud hecklers who said he had no business being there.

"It's truly a New York presidential campaign this year," Rich told POLITICO, evoking an inevitable baseball metaphor to describe what's sure to be a bacchanal of media coverage between now and the Empire State's April 19 primary contest: "It's very similar to when the Yankees are in the World Series." 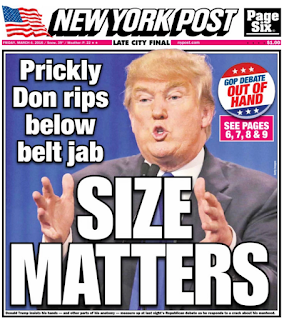 For New York's local press gang, the days leading up to the primary are shaping up like the Twelve Days of Christmas. That's because for the first time in a long, long time, New York is going to have a primary that actually matters-and not just because it involves Donald Trump.

"I've been a morning anchor since 1997," said Pat Kiernan, a host for the Time Warner Cable network NY1 who obsessively follows local media, "and I don't remember a time when we were anything more than a rubber stamp.

And yet here we are in the surreal campaign season of 2016, with Brooklyn-born Bernie Sanders and carpetbagging Hillary Clinton battling to be the face of progressivism for the Democratic party; an evangelical Texan nipping around the edges at the delegate count of the Big Apple's bawdiest power broker, who symbolizes that which is anathema to his opponent-"New York values."