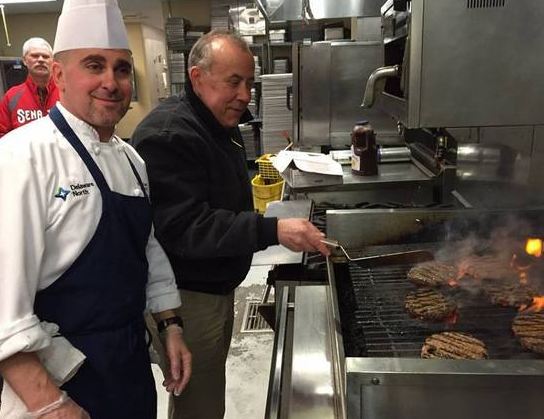 Along with Spot Dogs and Arooga's wings, minor league baseball fans at the newly named FNB Field in Harrisburg, PA this season will find a new concession item.

Introducing the  R.J. Harrisburger. The burger joins the lineup of food offerings this season at the Harrisburg Senators baseball games, according to pennlive.com.

The 1/2-pound chop steak burgers are topped with house-pulled barbecue pork, sautéed peppers and onions and melted pepper jack cheese.  It's all served on a sub roll with the option of plain or barbecue potato chips as an additional topping.

The sandwich is named after R.J. Harris, morning radio host on News/Talk WHP 580 AM and operations manager for the station. He worked with the stadium's executive chef Paul Deiana-Molnar of Delaware North Companies to create the burger, priced at about $11.

Harris has been a longtime supporter of Senators baseball for decades. His son Michael, was a bat boy for the team. Harris also has a connection to the team through the radio station.

Fellow radio personality Bob Hauer came up with the idea for a burger, Harris said.

Harris said he originally proposed topping a burger with sausage but Deiana-Molnar steered him toward pulled pork.

"He really took it, and turned it into magic," Harris said.

Many might question why Harris, who lost 215 pounds and recounts his battle with obesity in the book "It Ain't Easy Being Fat," would back such a big burger creation. But in the words of Harris, it's all about moderation.

"That will be the most decadent thing I have all week," Harris said. "It is the way I live my life. If you deprive yourself you'll go crazy."

Plus, Harris points out the burger is large enough to share.
Posted 3:06:00 AM