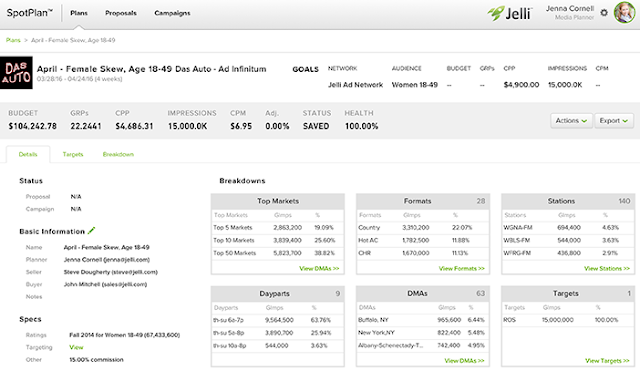 Initial customers of SpotPlan for Advertisers include the largest ad agencies in the United States, and it provides access to the groundbreaking programmatic ad buying platforms including iHeartMedia's Private Network and Expressway from Katz, the first industry-wide programmatic buying ad exchange at scale for the radio industry's most important players.  Jelli created the new cloud-based technology platform in response to advertiser demand, opening up the ability for both advertisers and agencies to buy premium radio advertising in real-time on a self-service, automated basis.

Radio is a $40 billion global advertising medium, reaching hundreds of millions of people and representing approximately 1 in 10 advertising dollars.  However, before today all radio advertising has been sold via a highly manual request for proposal (RFP) process that has significant inefficiencies and lacks the ability to apply new data-driven ad buying strategies.

By contrast, programmatic buying is scaling rapidly in digital advertising.  As part of this trend, a large portion of programmatic advertising is bought by advertisers and agencies using self-service automated demand-side software that leverages real-time data and automation efficiencies.

According to IDC, programmatic advertising is on target to hit $19.7 billion globally in 2016 and is growing at 23% annually.  IDC forecasts that 'automated guaranteed' and 'private networks' will be the fastest growth segments of programmatic advertising, projected to expand by 37% in 2016 and 47% in 2017, as the availability of premium inventory continues to grow. Source: IDC, Digital Advertising Market Model (DAMM), 2015.

Karsten Weide, Program Vice President, Media & Entertainment at IDC said, "Radio is emerging as an exciting new area for programmatic advertising, combining the inherent reach of the medium with self-service demand-side technology, advanced data integration and large scale automated guaranteed and private exchanges. The use of programmatic continues to grow rapidly across the media landscape, as marketers tap the benefits of automation and efficiencies to achieve higher ROI on their media spend."

SpotPlan for Advertisers is cloud-based software that for the first time enables advertisers and agencies to buy radio ads on a self-service basis from the largest programmatic ad platforms for radio advertising—the iHeartMedia Private Network and Expressway from Katz.
Posted 3:14:00 AM