Spotify To Use Data To Unlock The Power Of 'Superfans' 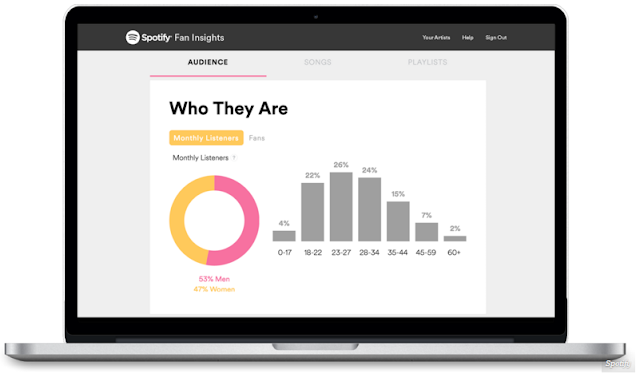 Since Spotify began to gain prominence, there has been a debate over whether its royalty system pays musicians enough. Critics often cite the small royalty checks musicians get for substantial amounts of streams. Spotify supporters point out that 70% of Spotify’s revenues go to recording and publishing rights, and that Spotify is only one piece of the music industry apparatus that produces revenue for artists.

Regardless, finding new revenue streams for artists is a top priority for the company, Lucchese tells BusinessInsider. And he thinks a key to unlocking these is tapping into the superfan market.

Spotify looks at various indicators, like length and depth of listening, to find “high-passion” fans, who Lucchese says are more than five times more likely to spend money on things like concerts than the average listener.

The next step is taking advantage of this knowledge, Lucchese explains. One method Spotify uses is pre-sale ticket emails to superfans. “We've done over 100 of these, and the metrics are pretty nuts. The average open rate on these emails we're sending is 35% … and the click-through rates average about 18%.”

For most artists, Lucchese estimates that the majority of their revenue comes from 10-20% of their fan base. These are the ones that buy  concert tickets and merchandise, crucial elements in a music economy where streaming services (like Spotify) don’t usually provide the bulk of an artist’s income.
Lucchese wants artists to see Spotify as a valuable source of data.

And to show the types of insights Spotify can give, he starts listing the different types of superfans Spotify has identified.

Here are three basic categories:
The thinking is that information like this can help musicians plan their monetization strategy, and even their touring schedule (by finding out which areas of the country they are most popular in).
Posted 3:24:00 AM