In 1901...singer Morton Downey was born in Wallingford Connecticut. His national radio appearances began in 1930, in 1932 he was voted Radio Singer of the Year. In 1949 he debuted on TV, hosting the show Star of the Family in the 1950′s. 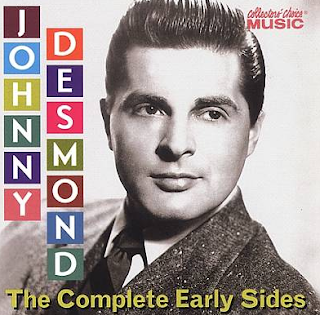 In 1920...singer Johnny Desmond was born in Detroit.   He was featured on Don McNeill’s Breakfast Club (radio& TV), and was a regular on TV’s Your Hit Parade, Face the Music & Songs for Sale.


In 1921...the first opera by a professional opera company was broadcast over KYW-AM, Chicago. The first words ever broadcast in Chicago were, "My God, but it's dark in here!"

According to radio historian Rich Samuels, they were spoken by Mary Garden, world-class soprano and director of the Chicago Grand Opera Association. They were uttered sixty-two years ago tonight on radio station KYW, licensed to the Westinghouse Manufacturing and Electric Company.

Ms. Garden said what she said because she couldn't see: the area where she was standing was lit by a single bare light bulb.

In 1934, the assignment of clear channels took a frequency away from Illinois and gave it to Pennsylvania, resulting in Westinghouse moving KYW to Philadelphia.  KYW used the frequency of 1020 AM at the time.

In March 1941, KYW changed frequencies to 1060 AM as part of a nationwide shift of radio frequencies mandated by the North American Radio Broadcasting Agreement. KYW and the other Westinghouse radio stations remained with NBC after RCA was ordered by the FCC to break up its radio networks, aligning with the former Red Network (the predecessor of modern-day NBC) in 1942. KYW acquired a television counterpart when Westinghouse bought WPTZ (channel 3) – the nation's third commercial television station and NBC's second television affiliate – in 1953. 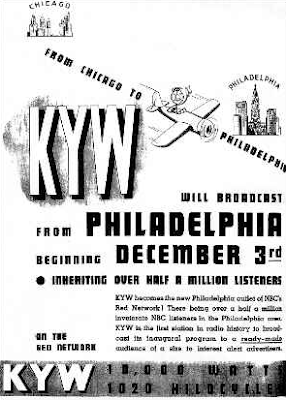 In June 1955, Westinghouse agreed to trade KYW and WPTZ to NBC in exchange for the network's properties in Cleveland, WNBK TV and WTAM-AM-FM. Westinghouse also received $3 million in cash compensation.  The main impetus for the trade was NBC's desire to acquire an owned-and-operated television station in the fourth-largest American television market. NBC had to seek a waiver for the swap since KYW and NBC Radio's New York City flagship, WRCA (now WFAN) were both clear channel stations; at the time, the FCC normally did not allow common ownership of clear-channel stations with overlapping nighttime coverage.

After clearing final regulatory hurdles, the swap went into effect on February 13, 1956. NBC took over the Philadelphia stations, rechristening 1060 AM as WRCV (for the RCA-Victor record label), and Westinghouse moved the KYW call letters to Cleveland.

However, almost immediately after the trade was finalized, Westinghouse complained to the FCC and the United States Department of Justice about NBC's coercion and an lengthy investigation was launched.  In August 1964, NBC's license for WRCV radio and television was renewed by the FCC – but only on the condition that the 1956 station swap be reversed.  Following nearly a year of appeals by NBC, Westinghouse regained control of WRCV-AM-TV on June 19, 1965 and subsequently restored the KYW call letters to the radio station (the television station became KYW-TV at this point).  To this day, the KYW stations insist that they "moved" to Cleveland in 1956 and "returned" to Philadelphia in 1965. 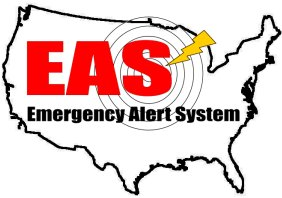 The Emergency Alert System (EAS) is a national warning system in the United States put into place on January 1, 1997, when it superseded the Emergency Broadcast System (EBS), which in turn superseded the CONELRAD System. The official EAS is designed to enable the President of the United States to speak to the United States within 10 minutes. In addition to this requirement, EAS is also designed to alert the public of local weather emergencies such as tornadoes and flash floods. A national EAS test was conducted on November 9, 2011, at 2 p.m. Eastern Standard Time, but the nationwide federal EAS has never been activated.

EAS is jointly coordinated by Federal Emergency Management Agency (FEMA), the Federal Communications Commission (FCC), and the National Weather Service (NOAA/NWS). The EAS regulations and standards are governed by the Public Safety and Homeland Security Bureau of the FCC. Each state and several territories have their own EAS plan.  EAS has become part of IPAWS – the Integrated Public Alert and Warning System, a program of FEMA.

"The Buzz" turned out to be a failure, however, and less than a year later (August 5, 1997) switched back to its old call letters of WNSR and became a Hot AC station (later just strict AC) by the end of 1997. WNSR was also short-lived, when in January 1998, they started the "Big 105" phase. 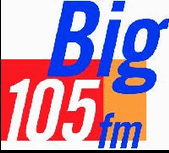 Calls were changed to WBIX on April 13, 1998, and the format evolved back to Hot AC, and later Modern AC.

The station initially held a contest to name themselves. On Christmas Eve 1998, the name chosen was "Jammin' 105". Calls were officially changed to WTJM on March 1, 1999.

In 2001, with the Jammin Oldies craze dying down, WTJM refocused their playlist somewhat, to become a borderline Urban AC with the slogan "Jammin' 105-1: The Heart & Soul Of New York."