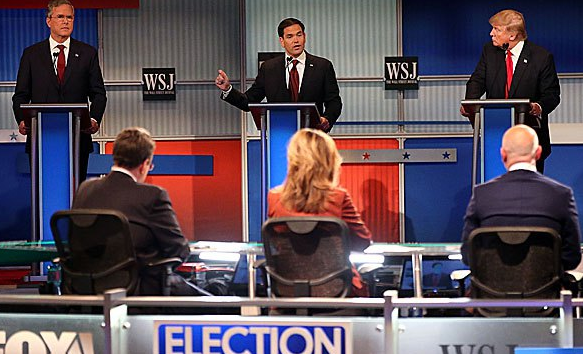 Tuesday’s main GOP debate on the Fox business Network from Milwaukee averaged 13.5 million viewers from 9-11 p.m. ET, according to Nielsen estimates, down from recent debates on both the Republican and Democratic side but easily the most-watched program ever for the eight-year-old FBN. To put Tuesday’s ratings haul into perspective, consider that Fox Business Network averaged just 102,000 viewers per business day during October, according to Nielsen.

For the night, Variety reports FBN was No. 1 among all cable networks and the debate’s average audience was second among all shows on the night — behind only CBS drama heavyweight “NCIS” (16.68 million). And in the key news demo of adults 25-54, the debate (3.7 million) ranked third behind only NBC’s “The Voice” and “NCIS.”

Fox Business Network is typically available in much fewer homes than previous debate networks Fox News Channel, CNN and CNBC, but some cable and satellite providers agreed to make Fox Business Network available to all subscribers for both of Tuesday’s debates. The debates were also streamed live at FoxBusiness.com and available via the Fox News app or the Fox News Election HQ 2016 app, with no authentication from a cable or satellite provider required.

The primetime debate, hosted by FBN’s Neil Cavuto and Maria Bartiromo as well as Wall Stree Journal Editor-in-Chief Gerard Baker, featured eight presidential hopefuls who had scored at least 2.5% of the votes in an average of four recent polls.

The highest-rated primary debate of 2015 remains the first, when Fox News Channel averaged 24 million viewers for the Aug. 6 debate from Cleveland. CNN followed with 23.06 million for its first GOP debate on Sept. 16 and then 15.79 million for the first Democratic debate on Oct. 13. Two weeks ago, CNBC set ratings records of its own by drawing 14 million viewers for a Republican debate (despite going up against the World Series on Fox).
Posted 3:52:00 AM