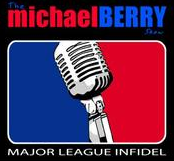 Donald Trump agreed KTRH 740 AM host Michael Berry that he and Senator Ted Cruz have a lot of respect for each, suggesting that the Texas senator seems to be coming around to his way of thinking on deportations as of late.

Berry asked Trump on if he could cut defense spending and Trump said he wanted a strong defense, but that there is waste in the system, pointing to a replacement aircraft that pilots said was not as good as its predecessor.