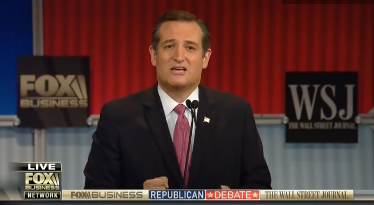 The fourth televised debate for the Republicans hosted by Fox Business Network had more people talking about it online than the third debate hosted by its older and bigger rival CNBC two weeks ago. The Tuesday night debate ranked in an average of 13.5 viewers, setting a record for the eight-year-old network.

The U.S. senator from Texas, considered a mid-tier candidate in terms of his standing in opinion polls, had the highest social media sentiment analysis score of 11 as well as the highest number of mentions on Twitter during the debate, according to Thomson Reuters data.

He topped Republican front-runners Donald Trump, who scored 3.3, fourth in the social media rankings, and Ben Carson, who scored negative 6.7 and came in fifth, for the first time since the 2016 presidential campaign season kicked off this year. A score above 0 means there are more positive mentions on Twitter about a candidate than negative ones.

Cruz also went into the debate with the most positive social media sentiment score among the eight candidates who took the stage in Milwaukee for the debate televised on the Fox Business Network.

Senator Marco Rubio of Florida, another mid-tier candidate, also rose to the top ranks on social media with a score of 6.5, third in the rankings, according to a Thomson Reuters social media sentiment analysis tool. The tool tracks and aggregates social media mentions of candidates to generate a score based on the ratio of positive versus negative mentions.

One of the most tweeted Cruz moments involved his answer when asked about his desire to raise the retirement age and reduce benefits for future retirees: "I don't think we should be pushing any grannies off cliffs." 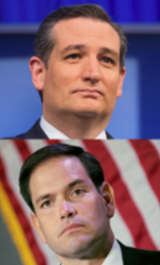 An intense argument over tax code and military spending by Rubio, Paul and Cruz in the second hour of the debate was also one of the most shared moments, according to data by Twitter.

Senator Rand Paul of Kentucky stole the spotlight in the last hour of the debate when he corrected Trump, pointing out that China is not part of the Trans-Pacific Partnership (TPP) trade pact. Paul's social media sentiment score jumped from negative to positive, giving him an end score of 8.1, just behind Cruz.

Carson, however, had the most-liked social media post of all candidates: An image of himself and his granddaughter having "pre-debate time" that got more than 171,300 likes on Facebook, according to technology data company Engagement Labs.

But the most-shared tweets of the night came not from accounts linked to the GOP candidates, but from Democratic presidential candidate Bernie Sanders (@BernieSanders).

His tweet targeting Trump - "We already have the biggest military in the world, yet veterans sleep out on the streets. Will Republicans talk about this? #GOPDebate" - had more 4,000 retweets and 5,000 likes on Wednesday.

There were about 1.5 million mentions that included hashtag #GOPdebate on Tuesday on Twitter, nearly double the amount seen on the day of the CNBC debate, according to Thomson Reuters analysis of Twitter.