Carson: Push Against 1st Amendment is Anarchy In The Making 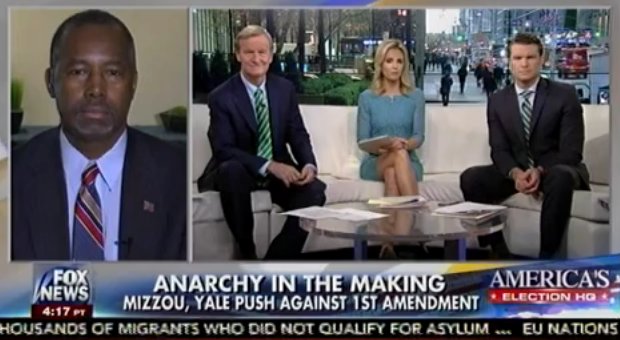 Ben Carson joined FNC's Megyn Kelly tonight and Fox&Friends this morning to talk about the University of Missouri protests and lamented how colleges are just “accepting infantile behavior.”

He said that people should be having a dialogue on campus instead of demonizing each other, telling Kelly “this is just raw emotion and people being manipulated… by outside forces who wish to create disturbances.”


In a speech at Liberty University Wednesday, Republican presidential candidate Ben Carson reinforced the need for the United States to have a well-informed populace while simultaneously dismissing the notion that government should provide free college education.

Noting that the Founding Fathers considered a well-informed populace a “vital requisite” for freedom, Carson told the audience, “If people are not well-informed, all it takes is unscrupulous politicians and news media — and off the people go in a completely wrong direction.”

Mediaite reports Carson warned that an uninformed populace will absorb propaganda “into their method of thinking,” adding it then “becomes real easy for them to swallow things.”

“If they don’t really understand the financial situation of the country,” Carson continued, “and somebody comes along and says, ‘Free college for everybody!’ They’ll say, ‘Oh what a wonderful thing!'”

“They have no idea that all you’re talking about is hastening the destruction of the nation,” Carson concluded.
Posted 8:12:00 AM