Missouri Lt. Gov. Peter Kinder said he wants the University of Missouri to investigate the two university employees who blocked a student reporter during public protests.

KMOX reports the lieutenant governor said if he was in a position of power at the University of Missouri, he would investigate the circumstances surrounding two staff members who tried to stop a news photographer from doing his job.

The video was filmed after the resignation of UM System President Tim Wolfe.

“I would immediately, today, begin an investigation. I would have the appropriate authorities at the school call them in and ask them to explain themselves. The video speaks for itself very loudly,” Kinder said.

Assistant professor of mass media Melissa Click is also seen in the video asking for back up to force reporters off the grounds.

Melissa Click, the University of Missouri media professor heard saying she needed "some muscle" to keep a photographer away from a campus demonstration, has apologized.


"I regret the language and strategies I used, and sincerely apologize to the M.U. campus community, and journalists at large, for my behavior, and also for the way my actions have shifted attention away from the students' campaign for justice." She said she had called the journalists involved to apologize, personally, Click said in a statement. 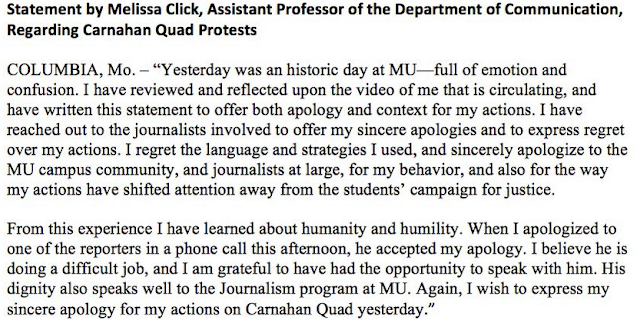 Tim Tai, the photographer she tried to keep away from a "no media safe space" activist group ConcernedStudent1950 set up on school grounds, accepted her apology.

Click also resigned her courtesy appointment with the Missouri School of Journalism, the Columbia Missourian reported.

"A courtesy appointment allows members of one academic unit to serve on graduate committees for students from other academic units. Click teaches mass media in the Communication Department. The School of Journalism is a separate entity," the report stated.