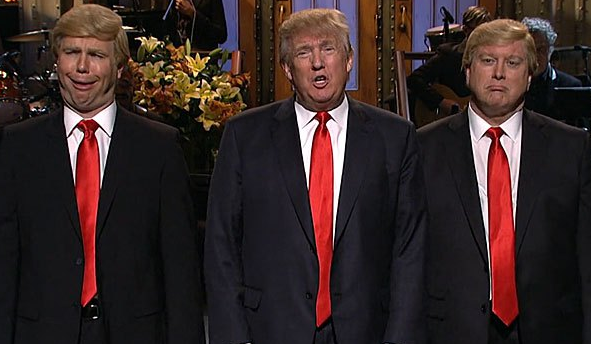 The show, which came under fire from Latino groups for inviting the blunt-spoken Republican presidential frontrunner to host, garnered a 6.6 rating in the 56 U.S. markets measured by Nielsen Media Research, NBC said in a statement.

The Trump show was the highest rating for SNL since Jan. 7, 2012, when an episode hosted by retired basketball star Charles Barkley pulled in a 7.0 rating, said the Comcast Corp.-owned network.

Saturday's rating was about 50 percent higher than the season premiere on Oct. 3 when Democratic presidential hopeful Hillary Clinton made a cameo appearance, according to CNNMoney.com.

Ratings are a measure of the audience as a percentage of all television households, whether their sets were turned on or not during the show's time slot.

Trump's appearance received an avalanche of advance publicity when Hispanic groups objected to NBC's decision to invite the billionaire developer, saying it was legitimizing his "racist" views on immigration.

The former star of reality TV show "The Apprentice" outraged many Americans in June when he described Mexican immigrants as rapists and drug smugglers. While he made a crackdown on illegal immigration a main campaign theme, Trump has also said many of his employees are Hispanics and that they love him.

The show made reference to that controversy when comedian Larry David, in an obvious send-up, called out "Donald Trump is a racist!" to an apparently unfazed Trump. David then told the host that he was seeking a $5,000 bounty that a website called DeportRacism.com promised to pay for on-air heckling.

Trump told CNN on Sunday that he vetoed some of the more risque skits, and earlier in the week he told Fox News it was because he didn't want to alienate voters in Iowa, home of the first event in the 2016 presidential nominating contest.