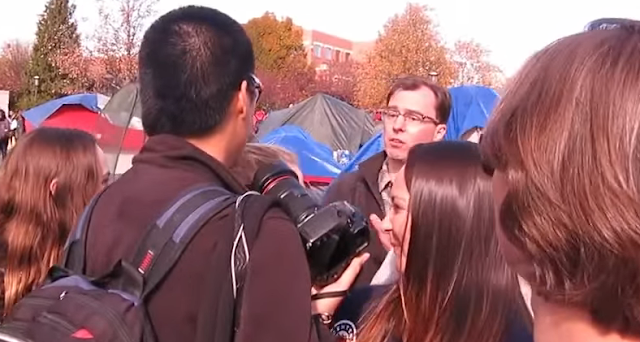 The warning signs circle the protesters' tent encampment like guard towers: No media allowed. The activists say the tent city is meant to be a safe space.

The LA Times report one problem: The tents are in the middle of a public, 1st Amendment-protected university quad.

The story of a student uprising led by black activists at the University of Missouri took an unexpected turn Monday when protesters and student journalists got into a clash over access.

A video of protesters surrounding and shoving a student photographer out of the way has since prompted indignation from journalists who say activists have gone to such great lengths to protect their own privacy and space that they have infringed on the rights of others.

The University of Missouri has one of the nation's largest and most prestigious journalism schools, and the story of the activists who forced the university system's president and the university chancellor to announce their resignations Monday surely rates among the biggest stories in the university's modern history.

Activists with Concerned Student 1950 — the main activist group involved with the recent protests — have strictly limited their contact with the media.