While he was an announcer at WLS in Chicago, Hay helped begin the “National Barn Dance” program. He then moved to WSM in Nashville, where he started a similar barn dance program in 1925. The “WSM Barn Dance” officially became known as the “Grand Ole Opry” two years later. Hay so named the program because it followed a broadcast by the NBC Symphony. He was largely responsible for developing the Opry into country music’s premiere showcase.

Hay was elected to the Country Music Hall of Fame two years before his death in 1968.

It became an affiliate of the Columbia Broadcasting System (CBS), now known as the CBS Radio Network, on September 1, 1929.  During the golden years of radio, KOIN was one of Portland's major radio stations, with an extensive array of local programming, including live music from its own studio orchestra. 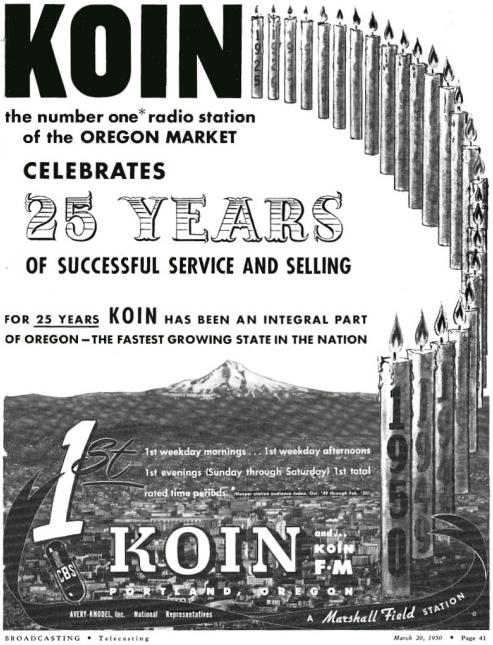 As a CBS radio affiliate, KOIN was the local home for CBS radio programs such as the CBS World News Roundup, Lux Radio Theater and Suspense. An FM station, KOIN-FM at 101.1, was launched in 1948. Both stations were owned by Field Enterprises, Inc. from 1947 until sold in 1952 to the Mount Hood Radio and Television Broadcasting Corporation.

KOIN and KOIN-FM were sold on May 1, 1977 to the Gaylord Broadcasting Company, and effective May 12, 1977 their call signs changed to KYTE (both AM and FM).  Its affiliation with CBS ended, and the CBS Radio Network's programming in the Portland market moved to KYXI at that time.

The stations using the former KOIN frequencies currently are KUFO (AM) and KXL-FM.


In 1930...sportscaster Charlie Jones was born in Fort Smith, Arkansas. For more than 30 years he called NFL football for NBC Sports.  He also broadcast baseball, golf, tennis, track & field at the Olympics, and soccer. 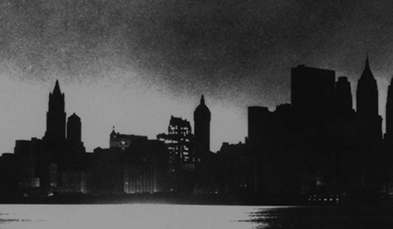 In 1965...At dusk on November 9, the biggest power failure in U.S. history occurred as all of New York state, portions of seven neighboring states, and parts of eastern Canada are plunged into darkness. The Great Northeast Blackout began at the height of rush hour, delaying millions of commuters, trapping 800,000 people in New York's subways, and stranding thousands more in office buildings, elevators, and trains. Ten thousand National Guardsmen and 5,000 off-duty policemen were called into service to prevent looting. 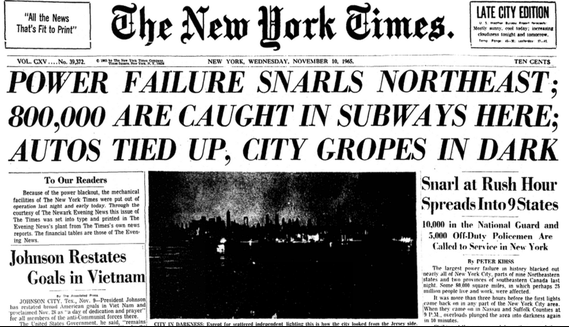 Here's how it sounded on 77 WABC with Dan Ingram.  The audio also includes Ingram on November 10... 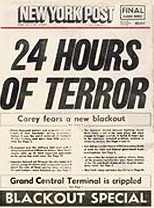 The blackout was caused by the tripping of a 230-kilovolt transmission line near Ontario, Canada, at 5:16 p.m., which caused several other heavily loaded lines also to fail. This precipitated a surge of power that overwhelmed the transmission lines in western New York, causing a "cascading" tripping of additional lines, resulting in the eventual breakup of the entire Northeastern transmission network.

All together, 30 million people in eight U.S. states and the Canadian provinces of Ontario and Quebec were affected by the blackout. During the night, power was gradually restored to the blacked-out areas, and by morning power had been restored throughout the Northeast.


In 1968...big-voiced actor Gerald Mohr suffered a fatal heart attack at age 54. He had logged 4,000 radio appearances, including the title role in 119 episodes of The Adventures of Phillip Marlowe.  He also had more than 100 TV acting credits of all stripes.


In 1999...The Recording Industry Association of America (RIAA) announces the century's big winners, sales-wise: The Beatles have sold the most albums (106 million), with Garth Brooks and Barbra Streisand the most successful male and female solo artists. Elvis Presley leads the pack on gold and platinum certifications with 77 (singles) and 80 (albums), while Elton John's "Candle In The Wind '97" (rewritten as a tribute to the recently-deceased Princess Diana) is the best-selling single of the century. The best-selling album, suprisingly, is the Eagles' Greatest Hits 1971-1975, which has just overtaken Michael Jackson's Thriller.

He had been enormously popular as Jackie Gleason’s sewer-worker pal Ed Norton in the TV classic The Honeymooners. He began as a radio actor, appearing regularly on Gangbusters and The March of Time, among many others. Carney also won the Best-Actor Oscar for the film Harry and Tonto (1974).