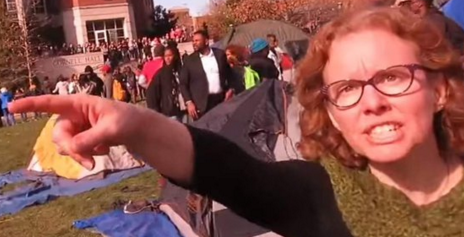 Melissa Click may just be the biggest hypocrite in the entire Missouri student protest, according to LarryBrownSports.com.

Click is an assistant professor in communications at Missouri, who brands herself on Twitter as a feminist media scholar. She has become known for being one of the people associated with the protest who bullied the video person who recorded student journalist Tim Tai, who was trying to cover the protest Monday with photos.

At the end of a video posted to YouTube Monday that has gone viral, Click is heard yelling that she needs some “muscle” to help her drive out the a media member who was recording the protest on video:


But when something like @melissaclick goes down at Mizzou, I can’t ignore it. Now, where's my muscle? pic.twitter.com/YkJPi4hwAy
— Busted Coverage (@bustedcoverage) November 10, 2015

As the video nears its end, the person taking the video, Mark Schierbecker, emerged from the scrum and approached a woman, later identified as an assistant professor of mass media, Melissa Click, close to the tents. When he revealed that he was a journalist, Ms. Click appeared to grab at his camera, reports The NY Times.

She then yelled, “Who wants to help me get this reporter out of here? I need some muscle over here.”

At another point in the video, Mr. Tai was also challenged by a university employee. Janna Basler, the director of Greek life and leadership on campus, approached Mr. Tai and, spreading her arms out, demanded that he “back off.”

As he tried to defend his right to be there, Ms. Basler explained, “You are infringing on what they need right now, which is to be alone.”

Click is an assistant professor of mass media in Missouri’s communications department.

According to the university’s website, “Her research interests center on popular culture texts and audiences, particularly texts and audiences disdained in mainstream culture. Her work in this area is guided by audience studies, theories of gender and sexuality, and media literacy. Current research projects involve 50 Shades of Grey readers, the impact of social media in fans’ relationship with Lady Gaga, masculinity and male fans, messages about class and food in reality television programming, and messages about work in children’s television programs.”

The journalism and communications departments are separate at Missouri, but Click is the chair of a committee that oversees student publications at the university.