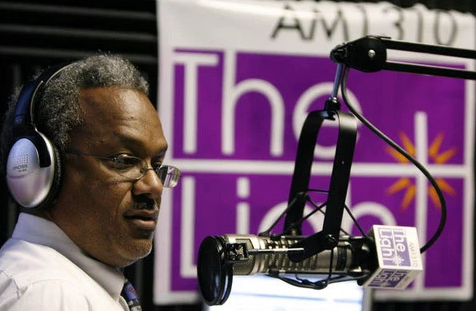 Brown, 64, a media presence and a leader in the African-American community in Indianapolis for 40 years, died Friday at his family home in Chicago.

The Indy Star reports he collapsed from what is believed to be a heart attack in his parents' home late Friday afternoon, Maryland-based broadcaster Radio One said.

He was known throughout Indianapolis and Central Indiana for his passionate advocacy on behalf of the African-American community and his fearless commitment to good journalism.

Brown's popular show, "Afternoons with Amos," running from 1-3 p.m. weekdays on WTLC 1310 AM, debuted on Radio One in 2004 and is one of the city's most popular radio shows. He was inducted into the Indiana Broadcasters Hall of Fame in 2007 and was a finalist for National Association of Broadcasters  Marconi Awards.

Brown moved to Indianapolis in 1975 from his native Chicago. After working in radio and TV for more than a decade, he launched Indianapolis' first daily African-American-oriented television news show, "The Noon Show" in 1992.

His broadcasts reached hundreds of thousands of people, Chuck Williams, Radio One Indianapolis VP/GM, said in a statement.

"A city is identified and driven by the depth and passion of our leaders’ civic commitment," Williams said. "Amos Brown was large among them."
Posted 3:00:00 AM