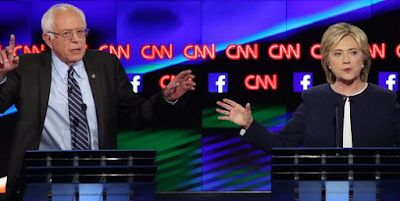 The first two Republican primary debates of this cycle drew record ratings, as 24 million tuned in to Fox News for its coverage of the Cleveland debate on Aug. 6, followed by 23.06 million for CNN’s debate from Simi Valley on Sept. 16.

The Democratic debate was easily Tuesday night’s most popular series or special on Twitter, according to Nielsen Social. Roughly 8.9 million people in the U.S. saw one or more of 2.8 million tweets sent about the debate, with the biggest moment coming at 9:50 p.m. ET, when 33,500 tweets were sent following Bernie Sanders’ comment about Hilary Clinton’s emails.
Posted 12:58:00 PM