Donald Trump Back On NBC To Host SNL 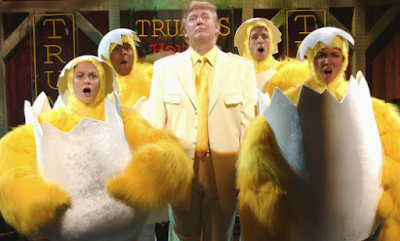 (Reuters) -- Republican presidential hopeful Donald Trump will be exercising his comedy muscles as the host of NBC's live sketch show "Saturday Night Live" next month, the network said on Tuesday.

Trump, the front-runner for the Republican nomination, will host the show with musical guest Sia on Nov. 7. It will be the billionaire businessman's second time hosting, following a stint in April 2004.

Actor Taran Killam currently plays Trump in "Saturday Night Live" sketches, and in the vein of the show, is quite likely to face the real Trump in a skit.

Clinton appeared in a cameo role on "Saturday Night Live" earlier this month, playing a bartender named Val who pokes fun at Trump while chatting to Hillary Clinton, played by cast member Kate McKinnon, about the November 2016 presidential election.

And here are Trumps Tweets from Tuesday's Democrat Debate...