Nielsen: Millennials Most Trusting Of Advertising

A recent Nielsen global survey found that trust levels in advertising have remained fairly consistent across earned, owned and paid formats over the past two years. Furthermore, among global respondents, self-reported action levels as a result of advertising actually exceeded trust levels for 14 of 19 advertising formats reviewed, suggesting that trust is not always a prerequisite to purchase. 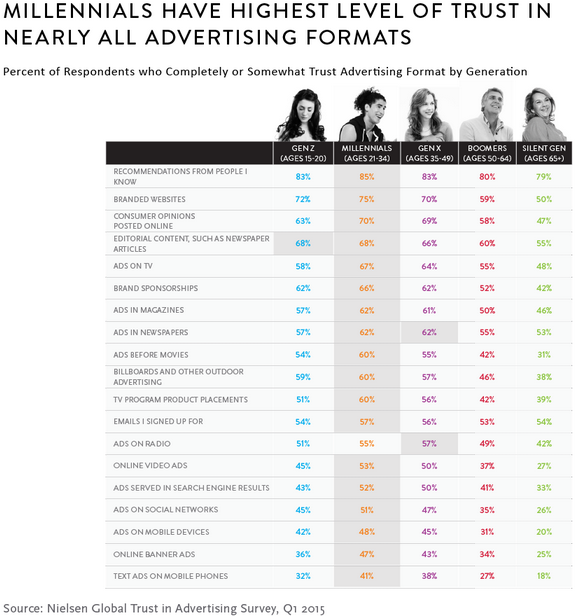 Millennials (age 21-34), who came of age with the Internet, have the highest levels of trust in online and mobile formats, followed closely by Generation X (age 35-49). While that may not come as a surprise, it’s not just online and mobile advertising formats where Millennials exceed the average. They also show the highest levels of trust in 18 of 19 advertising formats/channels, including TV, newspapers and magazines, and they’re also the most willing to take action on 16 of 19 formats.

“Millennials consume media differently than their older counterparts, exercising greater control over when and where they watch, listen and read content—and on which device,” said Randall Beard, president, Nielsen Expanded Verticals. “But even if they rely less heavily on traditional channels, their trust and willingness to act on these formats remains high. While an integrated, multi-channel approach is best across all generations, it carries even more importance when reaching Millennials.”
Posted 3:29:00 AM