Cover Up At Playboy: Dropping Nudes 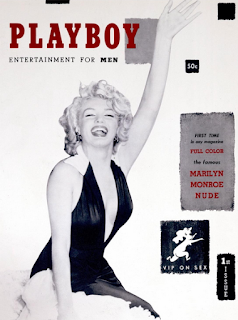 Now readers of Playboy, the glossy men's magazine known for its nude fold-outs, can honestly say they are buying the magazine for its articles.

Playboy will no longer publish nude photographs of women, the New York Times reported on Monday in an article quoting Scott Flanders, the company's chief executive.

Founder and editor-in-chief Hugh Hefner, 89, who in his trademark silk pajamas has embodied the Playboy lifestyle, agreed last month with a suggestion by top editor Cory Jones to stop publishing images of naked women, the Times said.

At a time when every teenage boy has an Internet connected phone and the web is rife with pornography, the magazine has opted to continue featuring women in provocative poses, just not completely nude, the Times said.

"You're now one click away from every sex act imaginable for free," Flanders was quoted as saying in the Times. "And so it's just passe at this juncture."

Reuters reports the magazine that featured Marilyn Monroe on its debut cover in 1953 is making the changes after circulation dropped from 5.6 million in 1975 to about 800,000 now, the Times said.

After its initial success, the magazine was attacked from the political right because of the nudity and from the left by feminists who said it reduced women to sex objects.

Some changes are still under debate, including whether there will continue to be a centerfold. Playboy magazine's sex columnist will be a woman, who writes enthusiastically about sex, Jones told the Times.

The magazine has always had intellectual appeal with top writers such as Kurt Vonnegut, Joyce Carol Oates, Vladimir Nabokov, James Baldwin and Alex Haley for men who liked to say they did not buy the magazine just for the pictures.

“Don’t get me wrong,” Mr. Jones said of the decision to eliminate nude pictures, “12-year-old me is very disappointed in current me. But it’s the right thing to do.”
Posted 3:06:00 AM