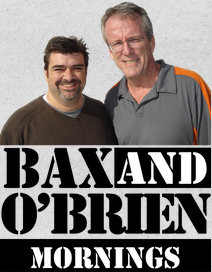 One week after surgery to remove three nodules from his right lung, John O’Brien, the man who makes up one half of Bax and O'Brien on the Rock WAQY 102.1 FM morning radio show, wants to make sure his latest diagnosis is clearly understood.

“This is not lung cancer. This is melanoma in the lungs,” O’Brien told 22News.

O’Brien battled Melanoma three years ago after finding a cancerous lump on his back, but doctors now tell him that same cancer is still in his body.

“It has not gone away. It was obviously lying somewhere either waiting or in transit through the lymph system and now it has popped up in my lungs,” O’Brien said.

In his first battle with the disease, O’Brien had two surgeries and nine months of interferon treatment
which he said gave him the same negative side effects as chemotherapy minus the hair loss.

He’s always spoke publically about his cancer hoping to raise awareness for others with the disease and says this time he plans to do the same.

“The idea of going on the air every day is actually somewhat therapeutic for me. I know some people may think we share too much, we do that because we know we’re not going through, we’re not experiencing anything a lot of other people aren’t going through right now,” O’Brien told WWLP 22News.

He said this around his diagnosis has moved from stage 3 to stage 4. “There are only 4 stages, but there is terminal, inoperable and where I’m at so it’s still an optimistic place.”
Posted 3:01:00 AM