Tickets are free and can be picked up at “ticket stops” posted on the station’s website.

On Thursday, October 15th, the Tom Joyner Morning Show will simulcast nationally from the
92.1 WROU studios at 6:00a.m. 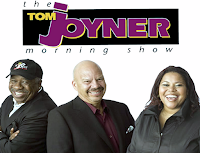 WROU Program Director, Faith Daniels, added, “We’re always honored to have Tom in Dayton! In addition to being a national radio personality, Tom Joyner is a philanthropist; his foundation provides scholarships to college students right here in the Miami Valley attending Wilberforce University and Central State University!”
Posted 3:11:00 AM