Alpha Media/Columbia partnered with WIS-TV10 and the American Red Cross on a two day
Radiothon/Telethon to raise funds that were in such critical need after floods of historic proportion decimated most of central South Carolina. 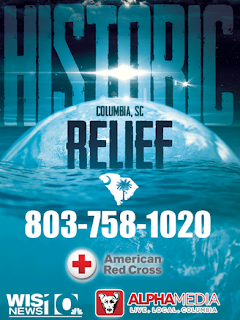 Alpha Media Columbia Market Manager, Mike Hartel commented on the announcement, “You have to personally walk the streets of Columbia to fully understand the devastation that these floods caused to our community. Once you see it firsthand, you know it will take a monumental effort to rebuild andthat’s why it was so important to us to partner with the American Red Cross and WIS-TV. The team at WIS-TV represents the same live and local mission that we do at Alpha Media, so I knew the partnership would do great things together. By uniting these three great organizations, I think it had a unifying effect on our community.”

Vice President and General Manager of WIS-TV Lyle Schulze added, “Our hearts were warmed by the generosity and professionalism of Alpha Media in Columbia in the immediate aftermath of the epic flooding last weekend. We appreciate their team of professionals and the work they did to help us provide funding for the American Red Cross. Together we raised well over $700,000, all of which will remain right here in the local community.”
Posted 9:10:00 AM