LOS ANGELES (Reuters) - Rapper Jay Z said in court on Wednesday that he had no responsibility for clearing the rights for music used in his recordings, testifying at the trial of a copyright lawsuit over his 1999 hit song, "Big Pimpin'."

Jay Z and hip hop producer Timothy "Timbaland" Mosley are among the defendants named in a 2007 complaint by the nephew of late Egyptian songwriter Baligh Hamdy, who alleged that the rapper had used his uncle's song without permission.

When asked if he had cleared copyright for Hamdy's "Khosara, Khosara" melody, Jay Z said, "That's not what I do. I make music." 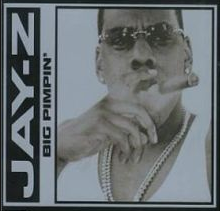 Jay Z, whose real name is Shawn Carter, appeared calm throughout his hour-and-a-half testimony on the second day of the trial at U.S. District court in Los Angeles, saying he had assumed his producer Timbaland had created the key chorus melody in "Big Pimpin'."

"I didn't think it was a sample. There would be no reason for me thinking to clear the song," he said.

The rapper said hundreds of people typically deal with his contracts and licensing.

Testimony by Mosley, who goes by "Timbaland," followed Jay Z's, and the hip-hop producer described composing "Big Pimpin'." Timbaland said he created a rhythmic beat before adding the beginning of Hamdy's "Khosara, Khosara" track, which he said he found on a CD of Arabic music labeled "license free."

"I'm thinking it's free music, free songs, and I sampled it," Timbaland said during his hour-and-a-half testimony.

He demonstrated the process in court with a keyboard that had been set up by the witness stand, recording a rap vocal and layering several sounds over it to create a brief musical piece.

Timbaland said when his legal team alerted him to a copyright claim, he immediately asked how to solve it and was advised to pay $100,000 for the license.

"Legal just told me, 100 grand, and you're clear," Timbaland said. "I thought I was free and clear."
The producers paid $100,000 to EMI Music Arabia to acquire the license.

Timbaland said he had never been contacted by Osama Ahmed Fahmy, Hamdy's nephew, who filed the initial complaint, before the lawsuit. On learning of the complaint, he said, "I was like, so who did I pay the 100 grand to?"

Testimony from Fahmy, who delivered his deposition by video, will be heard by the court on Wednesday.

(Editing by Piya Sinha-Roy and Jonathan Oatis)
Posted 3:38:00 AM