UPDATE 11AM FRIDAY:  Steve McCoy was fired from WYAY 106.7 Friday following his admittance that he “recycled” an old Donald Trump interview and advertised it as new on Tuesday.

“For obvious reasons Steve McCoy no longer works at the station. Cheryl White, Drew Nelson and Randy Wyles will continue to provide Atlanta with a high energy news product that accentuates breaking news as well as in depth coverage on the top stories.”

Atlanta radio host Steve McCoy who told listeners that he had interviewed Donald Trump this week has admitted that he repackaged an old interview, and been suspended from the air at Cumulus' WYAY 106.7 FM.

Steve McCoy originally told BuzzFeed News and his listeners on Tuesday when the interview aired that the it occurred on Monday, and as a precondition for the interview, he couldn’t ask Trump about his policies.

On Wednesday, a lawyer for the Trump campaign denied the interview took place, and told BuzzFeed News that McCoy admitted to them that he had repackaged an old interview. 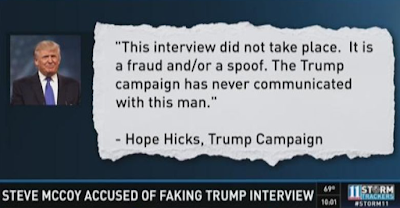 And in a new development, the Atlanta Constitution is reporting McCoy has Parkinson's disease.

He had planned to share his medical news with listeners before he was suspended, a former partney Vikki Locke told the AJC on Thursday night.

“Steve McCoy enjoys a good fight,” she said. “Since our first meeting back in the 80’s I knew one thing for certain. Steve loves radio. It’s his passion. His life. He wants to win at all costs. Now he is in the battle of his life. He is fighting Parkinson’s disease. Other than his wife, he’s been hiding this from family and friends since 2006 when he was diagnosed.”
Posted 11:50:00 AM