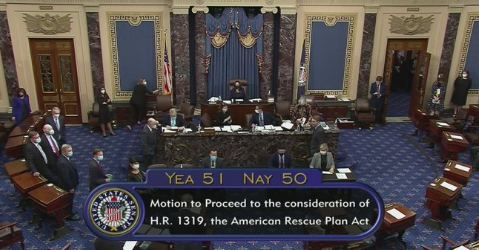 HARRIS CASTS TIE-BREAKING VOTE: The Senate voted yesterday to begin debate on President Biden's $1.9 trillion Covid-19 relief bill, with Vice President Kamala Harris having to cast the tie-breaking vote as all 50 Democrats voted in favor and all 50 Republican were opposed. Democrats are hoping to get the legislation approved by next week, using a budget procedure that prevents Republicans from being able to use the filibuster to block it, so that it can pass with a simple majority. Republicans object to the huge cost of the package, saying it's not necessary as the Covid outlook is brightening. A central part of the bill is sending $1,400 to most Americans, and it also includes money for Covid vaccines and testing, aid to state and local governments, help for schools and the airline industry, and more.

➤CAPITOL POLICE CHIEF ASKS FOR NATIONAL GUARD TROOPS TO REMAIN: U.S. Capitol Police Acting Chief Yogananda Pittman yesterday urged congressional leaders to use their influence to keep National Guards troops at the Capitol, citing concerns about continuing threats in the wake of the January 6th attack. Pittman said in a letter obtained by the Associated Press that the board that oversees the Capitol Police has so far refused to extend an emergency declaration that's required to keep Guardsmen there. She asked for the congressional leaders' help with the Capitol Police Board, which reports to them. The request came on the same day that law enforcement was on high alert for a possible threat that never materialized of a militia group potentially trying to storm the Capitol again. The threat was connected to a largely QAnon conspiracy theory that former President Donald Trump would become president again yesterday, the original presidential inauguration day before it was moved to January 20th in 1933.

Fox’s @JoeConchaTV on the “absentee President” Joe Biden going 43 days without holding a solo press conference: The WH team “has zero confidence that this President can handle questions outside of hand picked reporters...” pic.twitter.com/Lj58jSWGIx


➤FAUCI: COVID RESTRICTIONS SHOULDN'T BE EASED UNTIL DAILY NEWS CASES UNDER 10,000: Dr. Anthony Fauci, the nation's top infectious disease specialist, said on CNN yesterday that coronavirus restrictions shouldn't be eased until the number of new cases daily in the U.S. falls below 10,000. He added that the restrictions should be pulled back gradually, after a substantial percentage of Americans have been vaccinated. The seven-day average of daily new cases as of Wednesday was more than 64,000. It hasn't been below 50,000 since mid-October, and was last under 10,000 on March 22nd last year, in the early days of the pandemic. 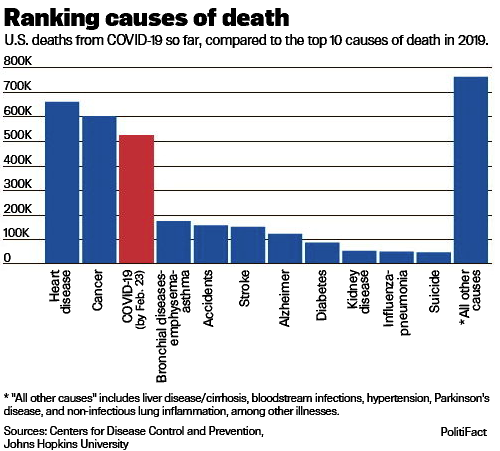 We were told the fascist restrictions were ALL about hospitals not being overwhelmed. Thanks to vaccines we are already there.

10K cases a day is impossible to reach (unless we greatly slow testing) because of false positives! https://t.co/eZ6no0KrJF

Fauci's comments came as some states have begun to rescind their restrictions, with some, such as Texas and Mississippi, allowing business to operate at full capacity and eliminating mask mandates, something Fauci called "inexplicable." Health officials have been strongly urging against that, saying the decline in cases from their high in January has stalled, and warning about the variants that are continuing to spread. 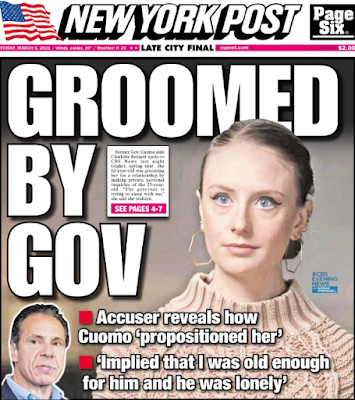 ➤'WSJ,' 'N.Y. TIMES': CUOMO AIDES ALTERED REPORT TO HIDE NURSING HOME COVID DEATHS COUNT: The Wall Street Journal and The New York Times reported late last night that top aides to New York Governor Andrew Cuomo altered a state Health Department report last July to obscure the number of people killed by Covid-19 in the state’s nursing homes. The aides pushed state health officials to edit the report so only residents who died in nursing homes were counted as nursing home deaths, not those who became sick there, but died later at a hospital. The report was intended to push back on criticism of Cuomo for a March directive that prevented nursing homes from being able to refuse to accept recovering Covid patients that were discharged from hospitals. The report concluded that the policy didn't play a role in spreading Covid infection. State officials said yesterday that changes in the report were made only because of concerns about accuracy.

Fox Corp. CEO Lachlan Murdoch says it is the job of Fox News to serve as the opposition to the Biden admin., stating clearly the political biases of a network that until 2017 billed itself as "fair and balanced." https://t.co/xM4hrCqLGo


➤STUDY...ONE IN FIVE MEN PREFER TO DATE WOMEN AT LEAST FIVE YEARS YOUNGER: Here’s a finding that everyone basically already knows—men prefer dating younger women. Researchers from two universities looked at the dating profiles of 120,000 eHarmony users. They found one in five British men, or 20 percent, are in a relationship with a woman five years younger, citing looks and health as key factors for choosing younger women. However, men who are fathers were found to be more open to dating women their own age, as their priorities and core values change. The data also found that on average, women prefer dating men at least 18 months older, citing emotional maturity and a desire for a committed relationship. When the researchers looked at the UK population as a whole, they found the average age gap between a woman and her partner is 20 months. However, men who did not want children had no age gap with their female partners—the researchers say this could be due to the subconscious belief that women around age 25 have the highest fertility.

➤STUDY...HIGHER INCOME PREDICTS FEELINGS SUCH AS PRIDE AND CONFIDENCE:  People who make bank tend to feel more confident, a new study confirms. The American Psychological Association studied data from 162 countries and found consistent evidence that higher income predicts whether people feel more positive "self-regard emotions," including confidence, pride, and determination. Lower income had the opposite effect, and predicted negative self-regard emotions such as sadness, fear, and shame. Lead researcher Dr. Eddie Tong says, "The effects of income on our emotional well-being should not be underestimated. Having more money can inspire confidence and determination while earning less is associated with gloom and anxiety." The study did not find a consistent link between income level and how people feel about others. Tong adds, "Policies aimed at raising the income of the average person and boosting the economy may contribute to emotional well-being for individuals. However, it may not necessarily contribute to emotional experiences that are important for communal harmony."
➤TWITTER LOLs AS ALEC BALDWIN QUITS BECAUSE PEOPLE ARE MEAN: Alec Baldwin has deleted his Twitter account (again), this time after receiving blowback for commenting on an article titled "Gillian Anderson's American accent throws some people off." Alec, who has been combatting outrage over his wife Hilaria’s on-again off-again accent and fudging of her heritage, wrote: "Switching accents? That sounds ... fascinating."

On IG video, he explained his defection: "Someone said this actress, who I won't mention, had switched accents during the press for her show … and I just wrote, 'Oh, that's interesting.' And of course you can't do any irony on Twitter. You can't do irony in the United States anymore, because the United States is such an uptight, stressed-out place, and such an unpleasant place right now."


Twitter’s sympathy was limited. Wrote one: “Summary of events. Wife lies repeatedly about national origin. Once her lies are exposed, she and husband try gaslighting, which doesn’t work. Both throw temper tantrums and disavow everyone because being a victim is awesome and again, gaslighting. And here we are.”
🏀CAPTAINS LEBRON, DURANT CHOOSE ALL-STAR TEAMS: The two captains for the NBA All-Star Game this Sunday in Atlanta, the L.A. Lakers' LeBron James and the Brooklyn Nets' Kevin Durant, picked their team members yesterday (March 4th). James picked as his starters, along with him: Milwaukee's Giannis Antetokounmpo; Golden State's Stephen Curry; Dallas' Luka Doncic; and Denver's Nikola Jokic. Durant, who won't actually be able to play himself because of an injury, chose: Nets' teammate Kyrie Irving; Philadelphia's Joel Embiid; the L.A. Clippers' Kawhi Leonard; Washington's Bradley Beal; and Boston's Jayson Tatum. Both captains also chose their reserve players.

🏒FLAMES FIRE HEAD COACH WARD: The Calgary Flames fired head coach Geoff Ward last night (March 4th), after the team went 11-11-2 to start the season. Ward was officially named head coach in the offseason after taking over on a interim basis last season. The Flames are replacing Ward with Darryl Sutter, who's been an NHL coach for several teams over 18 years, including previously for the Flames, and led the L.A. Kings to two Stanley Cup championships.

🏈ROETHLISBERGER STAYING WITH STEELERS, TAKING PAY CUT: Pittsburgh Steelers quarterback Ben Roethlisberger will be staying with the team, with the announcement made yesterday that the 39-year-old will be returning for an 18th season. Financial terms weren't disclosed, but it was reported that the two-time Super Bowl winner took a pay cut, with it having been widely known that the Steelers needed him to do so because of salary-cap issues.

🏀CREIGHTON BASKETBALL COACH SUSPENDED FOR 'PLANTATION' REMARK: Creighton University basketball head coach Greg McDermott was suspended indefinitely by the school last night for using racially insensitive language while speaking to the team after a loss last weekend. McDermott had publicly apologized on both Tuesday and Wednesday for urging the players to, quote, "stay on the plantation" after their loss to Xavier. He'd said, "Guys, we got to stick together. We need both feet in. I need everybody to stay on the plantation. I can’t have anybody leave the plantation." After the suspension was announced, McDermott wrote on Twitter: "I made a mistake and I own it. Mistakes come with consequences, and I accept and agree with the suspension."

June 2 will forever be known as Lou Gehrig Day.

Each year, we will celebrate his legacy and honor those we've lost to ALS. Together, we will help in the fight against this disease. #4ALS pic.twitter.com/jFP0Z7ym6L


⚾MLB TO HOLD FIRST ANNUAL LOU GEHRIG DAY IN JUNE: MLB announced yesterday (March 4th) that it will hold its first annual Lou Gehrig Day on June 2nd, honoring the New York Yankees baseball great throughout the major leagues. Each home team will have "4-ALS" logos in their ballparks to mark Gehrig’s No. 4, and all players, managers and coaches will wear a Lou Gehrig Day patch on uniforms and may use red "4-ALS" wristbands. The league said the day will focus on finding cures and raising money for research into ALS, also known as Lou Gehrig’s disease, which killed him at age 37 in 1941. June 2nd marks the 96th anniversary of when Gehrig began has consecutive games streak, which stood at 2,130 until his record was broken by Cal Ripken Jr. in 1995.
Posted 4:30:00 AM