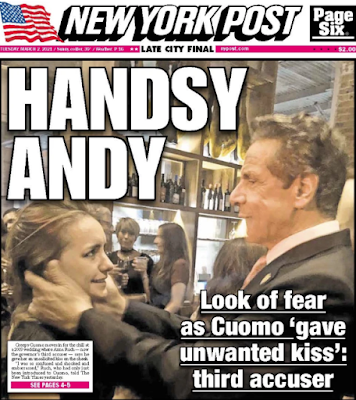 CLAIMS IMPROPER ACTIONS AT WEDDING: A third woman came forward yesterday accusing New York Governor Andrew Cuomo of improper behavior, increasing the calls for the Democratic governor to step down. Anna Ruch told The New York Times that moments after she met Cuomo at a wedding reception in September 2019 he touched her back, put his hands on her face, and asked if he could kiss her. A photo that accompanied the story showed Cuomo's hands on her face. Ruch, who's 33 and worked as a photographer at the White House during former President Barack Obama's second term, said, "I was so confused and shocked and embarrassed. I turned my head away and didn’t have words in that moment." Earlier in the day, state Attorney General Letitia James received a letter from Cuomo’s office authorizing her to take charge of an investigation of the claims against the governor. It allows her to have an outside law firm conduct a probe, with the findings to be publicly disclosed. Cuomo has denied inappropriately touching or propositioning anyone.

➤CDC DIRECTOR WARNS RECENT COVID PROGRESS COULD BE REVERSED, SAYS CASES RISING AGAIN: U.S. Centers for Disease Control and Prevention Director Dr. Rochelle Walensky warned Monday that the U.S. could potentially reverse the progress that has been made in recent weeks against the coronavirus since the height of the most recent wave in January as states continue to ease safety measures while the more contagious variants are spreading. Walensky said, "Please hear me clearly: At this level of cases with variants spreading, we stand to completely lose the hard-earned ground we have gained." The CDC director said that new infections are increasing again, with about two percent more this week compared to last, and the seven-day average of deaths has also risen by two percent. Some 15.3 percent of the U.S. population had gotten at least one vaccine shot as of Monday, according to CDC data, and about 7.7 percent have gotten both.

The Case that the Media Was Wrong to Accept Lockdown Effectiveness as the Basis of All Covid Coverage (by senior columnist @Zigmanfreud) https://t.co/74nz0O5Eza

➤TOP TEXAS UTILITIES REGULATORS RESIGNS IN WAKE OF WINTER STORM FAILURE: Texas' top utilities regulator resigned yesterday in the wake of the state's electric grid buckling in the wake of a winter storm in mid-February, leaving millions of Texans without power or heat and eventually water for days amid frigid temperatures and snow. More than 40 deaths in the state were blamed on the storm and the following blackouts. DeAnn Walker, the chairwoman of the Public Utility Commission, said in a letter to Governor Greg Abbott that she accepted her role in the power outages, but that others, including gas companies and lawmakers, should also take responsibility. Meanwhile, Texas' attorney general said yesterday that he's suing electricity provider Griddy, after its customers received huge bills during the storm. The suit accuses Griddy of violating the Texas Deceptive Trade Practices Act and is seeking refunds for customers.

➤CARDONA CONFIRMED AS EDUCATION SECRETARY: Miguel Cardona, Connecticut's former education chief who was once a public school teacher, was confirmed as President Biden's education secretary on Monday by the Senate. His nomination was approved in a 64-33 vote. Cardona has said he will make it his top priority to get schools safely reopened from their coronavirus shutdowns, something he pushed to do in Connecticut. Cardona was appointed as head of the state's education department in 2019 after 20 years working in public schools. He began as teacher, then became a principal and assistant district superintendent before becoming state education commissioner.
➤WARREN INTRODUCES 'WEALTH TAX': A "wealth tax" on the nation's richest Americans was a signature part of Democratic Senator Elizabeth Warren's 2020 presidential campaign, and now she's introducing it as as a new member of the Senate Finance Committee. Warren put forward the legislation, called the Ultra-Millionaire Tax Act, on Monday, along with Democratic Reps. Pramila Jaypal and Brendan Boyle. It would tax the wealthiest Americans on their net worth, imposing a two percent annual tax on households and trusts between $50 million and $1 billion, as well as a one percent annual surtax on households and trusts over $1 billion. As she introduced the measure, Warren charged that things had gotten worse during the pandemic, saying, "We have watched the wealth of the billionaire class in America increase by more than a trillion dollars over the last year." Boyle portrayed it as a, quote, "fair way" to bring in money to pay for what will need to help Americans recover from the pandemic, saying, "This is a hell of a lot better way to get revenue than taxing middle class and poor people in this country." If the measure were to pass in the House, it would face a tough time in the evenly divided Senate, and President Biden didn't support a wealth tax while running for the presidency, so it's unclear if he would sign it if it did pass.

Betting on death of petrol cars, Volvo to go all electric by 2030 https://t.co/P4qSgLWoa7 pic.twitter.com/paPEZ6mgX8

➤WHAT YOUR PEANUT BUTTER PREFERENCES REVEAL ABOUT YOUR PERSONALITY:  Do you prefer crunchy or smooth peanut butter? Your answer might reveal more about your personality than you might think. A study commissioned by Jif polled 2,000 Americans and found 50 percent prefer crunchy and 50 percent prefer creamy, and that 63 percent of those who prefer crunchy describe themselves as optimists, compared to just 56 percent of those who prefer creamy who said the same. Other findings: creamy fans tend to be more introverted, and early risers, while crunchy fans tend to be more extroverted night owls. Interestingly, a third of both groups said they love dogs and cats equally, and creamy fans recalled being bullied more for their peanut butter preference as children than crunchy fans did. Nearly half of all respondents said it would be a deal-breaker to find out their date is on the opposite side of the creamy vs. crunchy debate.
➤STUDY...NAPPING IS IN THE GENES AND NOT A ‘BEHAVIORAL CHOICE’:  If you feel like taking a nap right now you can blame your genes. Harvard University researchers dug into the human genome and found three potential napping mechanisms. The first two have been dubbed “disrupted sleep” and “early morning awakening”—referring to people who nap because they either did not get enough shut eye the night before, or woke up very early. The third referred to sleep propensity, or how much sleep is required by an individual. The experts say this means that daytime napping is biologically driven and not just an environmental or behavioral choice. Some of the genetic traits identified were also linked to health concerns, including obesity and high blood pressure.
➤JUDGE RULES THAT MISS USA PAGEANT CAN BAN TRANS-WOMEN: An Oregon judge ruled last week that the Miss USA pageant can ban trans woman, in a case brought by a trans woman in the state who wanted to compete in the pageant. Anita Noelle Green sued after she was told she couldn't compete in Miss USA because she wasn't a, quote, "natural-born female," charging the stance violated Oregon's public accommodations act, which says residents have the right to full and equal accommodations without discrimination on account of race, religion, sex or sexual orientation, as well as violated her First Amendment rights to free speech and free association. But district judge Michael Mosman ruled that Miss USA is a, quote, "expressive" organization, not a commercial one, so it has a First Amendment right to its message. Miss USA said it supports diversity and isn’t anti-trans, but stated in its motion to dismiss Green's claims that its mission is geared towards what it called "natural-born women," and that allowing trans women to compete would, quote, "undermine its vision" and affect its "message of biological female empowerment." 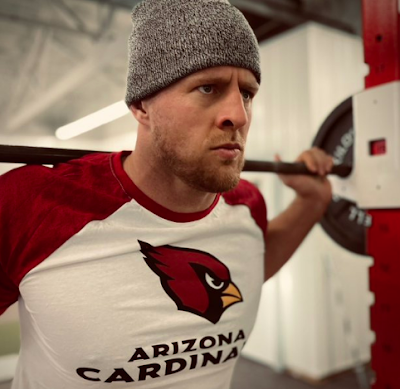 🏈WATT AGREES TO TWO-YEAR DEAL WITH CARDINALS: J.J. Watt has agreed to a two-year deal with the Arizona Cardinals, the 31-year-old defensive end breaking the news himself yesterday by tweeting a photo of himself wearing a Cardinals shirt with the caption, "source: me." ESPN cited a source as saying the deal is worth $31 million. Watt was released after 10 years by the Houston Texans, who granted his request.
🏀HAWKS FIRE HEAD COACH PIERCE: The Atlanta Hawks fired head coach Lloyd Pierce on Monday, with the news coming the day after the Hawks lost to the Miami Heat 109-99 for a 14-20 record, suffering their 11th loss after having a fourth-quarter lead. His overall record with the Hawks was 63-120 after being hired in 2018. Former Indiana Pacers head coach Nate McMillan, who joined Pierce's staff ahead of this season, was elevated to interim coach.

🏀ANOTHER RAPTORS GAME POSTPONED DUE TO COVID: A second consecutive Toronto Raptors game was postponed yesterday due to Covid concerns, with the game against the Detroit Pistons tentatively rescheduled for tonight. The Raptors' scheduled game against the Chicago Bulls this past Sunday was postponed indefinitely because of Toronto's positive tests and contract tracing issues. Yesterday's game was the 31st in the NBA postponed so far this season due to coronavirus issues.

🏀NIT TOURNAMENT WILL BE JUST 16 TEAMS, ALL GAMES IN DALLAS-FORT WORTH: The NCAA announced Monday that basketball's National Invitation Tournament (NIT) will be smaller this year and have a new location due to the coronavirus pandemic. There will be 16 teams playing, half of the usual 32, and all games will be played in the Comerica Center and UNT Coliseum in the Dallas-Fort Worth area. Normally, games are played at campuses until the semifinals and championship game at New York's Madison Square Garden. The NIT was canceled last year due to the pandemic.

🏈REPORT...QUARTERBACK ALEX SMITH EXPECTED TO LEAVE WASHINGTON: Quarterback Alex Smith is expected to be leaving the Washington Football Team in the coming days, the NFL Network reported Monday. The 36-year-old Smith was 5-1 as a starter this past season and helped lead Washington to the playoffs. He missed all of 2019 after suffering a serious leg injury in November 2018 that required 17 operations, and he recently told GQ of his return to Washington that the team didn't seem to want him back. He said, "When I decided to come back, I definitely threw a wrench in the team's plan. They didn't see it, didn't want me there, didn't want me to be a part of it, didn't want me to be on the team, the roster, didn't want to give me a chance." 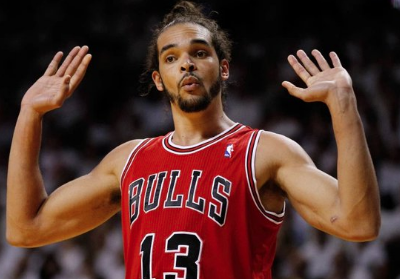 🏀REPORT...NOAH TO RETIRE AFTER 13 YEARS IN NBA: Center Joakim Noah will be retiring from the NBA after 13 years, according to a report from Shams Charania of Stadium and The Athletic. After being waived by the L.A. Clippers in December, the 36-year-old Noah remains unsigned. The report says Noah plans to retire with the Chicago Bulls, the team he was with for the first nine seasons of his career, and where he had his best years. He later spent two seasons with the New York Knicks, and time with the Memphis Grizzlies and Clippers.
Posted 4:18:00 AM