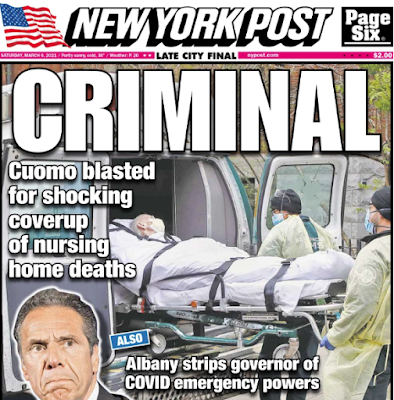 FOX News reports CNN, the network that employs the governor’s little brother Chris Cuomo, covered the report Friday morning on air but avoided it online through 11 a.m. ET on Friday, more than 12 hours after the Journal reported the latest development in the nursing home scandal.

CNN had long been accused of covering for the governor as it allowed Chris Cuomo to conduct a series of widely panned, playful chats disguised as interviews at the height of the pandemic while largely ignoring the nursing home scandal. Once the governor started to face criticism, CNN implemented a policy that banned his brother from covering the story.

Cuomo also faces multiple allegations of sexual harassment, which the network has recently covered on air and online after being initially slow to cover the claims. In fact, on Friday morning "Andrew Cuomo" was listed among the trending topics on CNN’s website but clicking on his name brought readers to a story about the sexual harassment scandal while the site was silent on the latest developments in the nursing home crisis.

"Cuomo" is mentioned once. In the tiny live updates at the top.

A new article about Cuomo's nursing home scandal appeared on the CNN homepage Friday afternoon, but not as a top story. The lack of online coverage of the embattled governor was also noticed Thursday morning by Tom Bevan of RealClearPolitics, as Cuomo faced a litany of accusations from former female staffers of inappropriate advances and harassment.