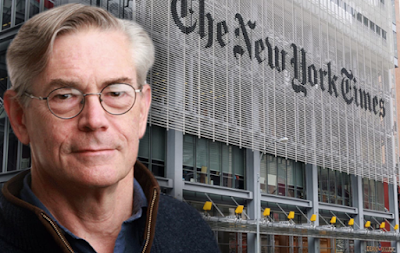 Former New York Times reporter Donald McNeil Jr., who was recently ousted from the Gray Lady over using the "n-word" during a paper-sponsored trip in 2019, accused the paper’s management of panicking and botching the situation and attacked other media outlets for misleading coverage on Monday in a lengthy series of essays, reports FOX News.

McNeil also shared an old email to a former colleague in which he said the Times environment had become a "spiteful" place and one of its senior leaders was turning the newsroom into "North Korea."

McNeil announced his resignation last month, shortly after The Daily Beast reported that he had been reprimanded by the Times over complaints the paper received from students on the trip to Peru. They alleged that the veteran science reporter used offensive rhetoric, including the "n-word."

McNeil wrote a lengthy Medium blog detailing his side of the story, noting that he decided to pen his explanation to avoid being misquoted by a "jackal" journalist, as he claimed The Washington Post had recently done. He called Times in-house media columnist Ben Smith’s coverage of his ouster "ridiculously inaccurate" and said The Daily Beast's initial story on his rhetoric was also inaccurate. 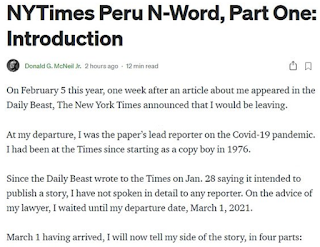 McNeil criticized the Times management for the way it handled the ordeal, while insisting that he is not an "a--hole" despite his crusty style and tendency to lash out at editors for over-correcting his stories. He apologized to any Times editors that he had spats with over the years before diving into his exit from the paper.

At one point, he pondered who leaked the story that would derail his career to the Daily Beast.

McNeil called the events leading to his ouster "a series of misunderstandings and blunders" and maintained he genuinely loves the Times and its mission.

McNeil said that associate managing editor for employee relations Charlotte Behrendt insisted the paper should work with the Daily Beast and provide a comment, despite McNeil urging Times honchos to ignore it. McNeil said he was forced to apologize, so he wrote a lengthy statement for the Daily Beast that explained the context behind his use of the word in the context of answering a student's question about whether another student should have been reprimanded over using it in a joking context.

McNeil said he objected to the Times PR team's because it made it appear he targeted someone with a racial slur when he did not. He added that he rejected other suggestions from the Times before finally reaching out to executive editor Dean Baquet, whom McNeil urged to enlist someone other than Behrendt to handle the matter, citing a conflict of interest from feuds the duo have had in the past related to the paper’s union.