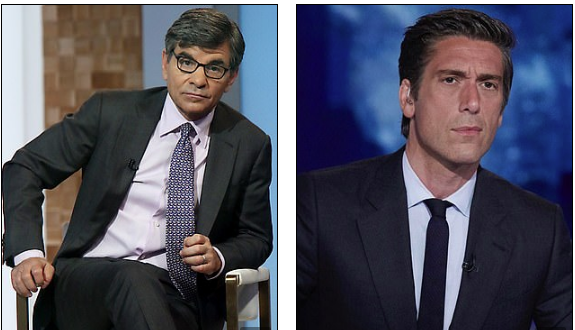 ABC News veteran George Stephanopoulos may be upset to relinquish the throne for breaking news to evening anchor David Muir, but even Stephanopoulos can’t deny the ratings turnaround that Muir has provided for ABC’s “World News Tonight,” according to The Wrap.

That’s not just a lead change, it is a swing of 2.8 million total viewers. No wonder ABC News just tapped the 47-year-old Muir to head up its breaking news duties, effectively replacing 60-year-old Stephanopoulos in the role.

Currently, “World News Tonight” is leading its fifth season in a row in terms of total viewers, and is ahead by the largest margin in 26 years. The program is No. 1 in the key news demographic of adults ages 25-54 for the second season in a row and holds the largest lead in that metric in 25 years.

Muir’s momentum is not a brand-new phenomenon, but it also does not appear to be slowing down. Last season, “World News Tonight” was the No. 1 program on all of television — so that’s broadcast and cable — for 23 of the season’s 52 weeks.

Muir’s show has been on the rise, but “Good Morning America,” which Stephanopoulos co-anchors with Robin Roberts, has sunk in ratings in recent years. That’s more of a product of the morning show environment, however — especially in the Trump era, when viewers have left broadcast television for the surging cable news channels.

Stephanopoulos has been branded 'pathetic' and 'out of touch with reality' for 'whining' about losing the Chief Anchor title at ABC News earlier this year after David Muir was promoted when he earns $15-million-a-year.

Disney boss Bob Iger flew from California to New York earlier this year to broker a deal with George Stephanopoulos after he threatened to leave ABC in a tantrum because younger rival David Muir had been promoted.

Stephanopoulos was irate when Muir was given the responsibility of leading the network's special coverage of breaking news stories and special events - a role Stephanopoulos has held since 2014.