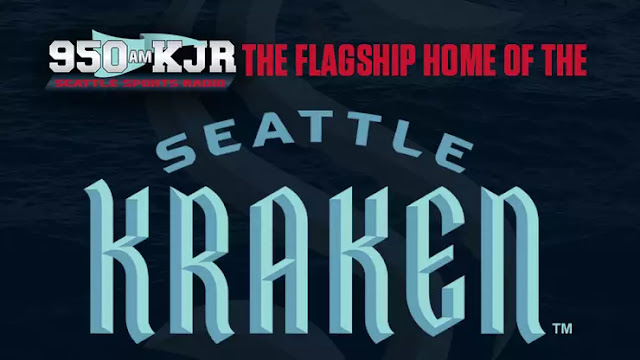 The Seattle Kraken and Climate Pledge Arena have announced a multi-year partnership with iHeartMedia Seattle that will benefit both hockey and music and entertainment fans across the Pacific Northwest. Beginning with the Kraken’s inaugural 2021-2022 season, iHeartMedia Seattle’s Sports Radio 950 KJR will serve as the official flagship radio home for Kraken games, broadcasting all home and away games.

iHeartMedia Seattle’s 950 KJR will cover the Kraken’s Northwest region games in Seattle, with selected games broadcasting on 96.5 JACK-FM. Fans around the world will be able to stream games via iHeartRadio.com and the iHeartRadio app. 950 KJR will broadcast live regularly from Climate Pledge Arena and Kraken Training Center, sharing all the latest team news and content.

“I couldn’t be prouder to join forces with Seattle Kraken,” said Mark Glynn, Market President for iHeartMedia Seattle. “This alliance not only encompasses Sports Radio 950 KJR as the flagship radio station but also strategically aligns our brands with Climate Pledge Arena in a groundbreaking agreement. Seattle Kraken CEO Tod Leiweke and Kraken COO Victor de Bonis and their team have been incredible to work with in creating this partnership.”

“Since our ticket drive in 2018, iHeartMedia Seattle and KJR have been with us every step of the way,” said Tod Leiweke, CEO of Seattle Kraken. “With hosts that are entertaining and informative, we have found the perfect home for our fans to listen to Kraken games, wherever they are.”

The radio broadcast will be led by Kraken Team Broadcaster Everett Fitzhugh, who will provide play-by-play for all games. Fitzhugh was hired in September 2020 and will continue with his digital hosting duties in addition to calling games on 950 KJR.

“We are extremely excited to bring Seattle’s newest professional franchise to the airwaves,” said Rich Moore, Senior Vice President of Programming for iHeartMedia Seattle. “It will be beyond fun helping build up this great fan base from the start, offering additional content and unique access on multiple platforms. Sports Radio 950 KJR and its entire team are proud to be the home of the Kraken!”

In addition, iHeartMedia Seattle also joins as a key promotional partner for music and entertainment. Climate Pledge Arena will be the home of more than 80 concerts and live events each year.