Cleveland singer-songwriter and radio personality Michael Stanley died Friday at the age of 72, following a months-long fight with lung cancer.

"Michael battled lung cancer for seven months with the same strength and dignity he carried throughout his life. He will always be remembered as a loving father, brother, husband, a loyal friend, and the leader of one of Cleveland's most successful rock bands," 98.5 WNCX said.

Prior to his passing, Stanley penned a farewell letter to his friends, family and fans. 98.5 WNCX shared his final message on their Facebook page. 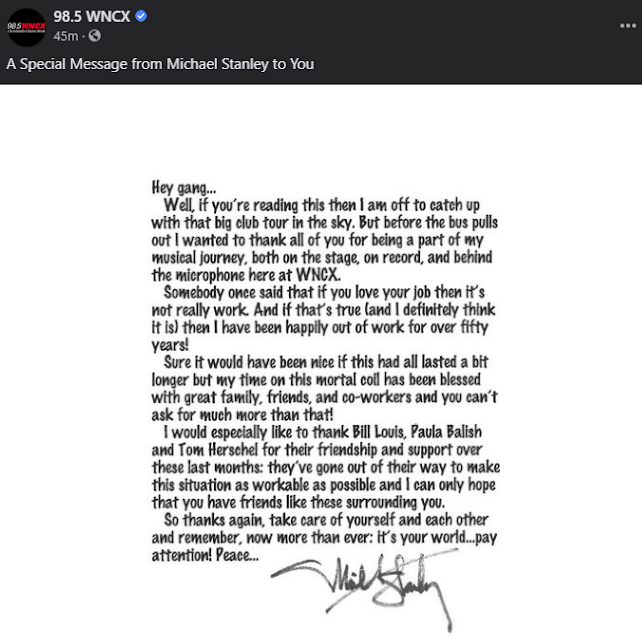 Stanley, a Cleveland native, recorded several memorable hits, such as "My Town” and “He Can’t Love You,” over the course of several decades. In all, Stanley recorded more than 18 albums and gave hundreds of concert performances.

In the 1970s and 80s, Stanley toured with some of the biggest names in music, such as Foreigner, The Eagles, Bruce Springsteen, and The Doobie Brothers. He also worked with Joe Walsh, Todd Rundgren and David Sanborn.

In addition to music, Stanley was the recipient of a dozen regional Emmy Awards for his work on television with Fox 8. He’s been a fixture on WNCX for years, most recently hosting the morning show.

A private service will be held by his family, and Stanley will be laid to rest at Lake View Cemetery. Instead of flowers, contributions can be made to the Cleveland APL and the Cleveland Food Bank in his memory.